Astrology is the most common and popular method of divination, it is also, arguably the most complex. It cuts through virtually all religious barriers, and has pervaded our entire culture. In the Bible, it states that the tree wise men were guided to the savior by the Star of Bethlehem, and many folks believe those men to have been astrologers themselves.

As it was in the days of old, so it is in the modern age.  It is a matter of fact that during his time as President of the United States, Ronald Reagan used a professional astrologer to time significant events and make other important decisions. How many of you have ever read your horoscope in a newspaper or magazine? Almost everyone knows his or her astrological sign; however few can tell you anything deeper about the subject.

Anyone who turns their attention to a deeper study of the subject of astrology will gain a great deal of knowledge about not only themselves, but also the individuals around them. With the advent of the internet, the average human has more access to the totality of human knowledge than any other time or place in history. There now also exist many program, several of which are free, which will erect your astrological chart, calculate the aspects within it and give you a good idea of what the stars have to say about your, your life, and your future.

One may define Astrology as divination by the stars; however, it is in reality the study of planetary cycles and how these cycles affect all aspects of our lives. The Earth, as well as the other 8 planets in our solar system moves in individual cyclic patterns around our Sun. In much the same way, our Moon revolves around the Earth, creating a delicate and highly complex grand design, also known as the macrocosm. It is believed that the world above mirrors the world below, hence the ancient maxim “as above, so below.” The planets do not dictate our thoughts, words, and deeds, they merely reflect them. Astrology is believed to have originated in ancient Egypt and Babylon, however, some of mankind’s greatest thinkers from all over the world believed in this universal concept and undertook a detailed study of planetary patterns and how they affect the many aspects of our lives, in order to obtain enlightenment.


Most of our knowledge of modern Astrology is based on information that came to use by way of the Greeks. The Greeks, who had developed advanced forms of mathematics, expanded on the information that had come from the Egyptian Astrologers. Even today, we still refer to the planets by their Roman name, simply because the Roman Empire absorbed so much of Greek culture when it invaded Greece, as it built is infamous empire.

While today we know that the Earth revolves around the Sun. this was not always thought to be true. Man once believed that the Earth was the center of the universe and the Sun revolved around it; in fact, even suggesting the reverse was once a crime punishable by death! During the twelve months it takes for the Earth to rotate around the Sun, the Earth is bathed in light at angles, which constantly change---producing the four seasons.


As stated earlier, the Earth rotates around the Sun, but from the viewpoint of those on Earth, the Sun appears to move across the sky. As it does so, it moves through the Zodiac, an invisible 360 degree circle divided into 12 sections of 30 degrees each. Each 30 degree section of the Zodiac is thought to be under the influence of one of the 12 Signs and Houses that comprise the Zodiac.

The houses and signs occupy the same space within the zodiac. However, where the houses are stationary, the signs are constantly moving. To better illustrate this idea, imagine two concentric circles, one inside the other. Each circle is divided into 12 equal sections. The outer circle represents the Signs of Astrology, and the inner circle represents the Houses of Astrology.


The first house is located at about the same place as the number 8 on the face of a clock, and it naturally lines up with Aries, the second House is located at the number &, and lines up with Taurus, and forth through the Zodiac. The Houses and the Signs also share the same correspondences. It is interesting to not that each sign is bases on a constellation additionally, each constellation has its own myth, or set of myths attached to it.

The Search for Meaning in the Zodiac

Each of the twelve Signs and Houses of the Zodiac have specific correspondence, they are.

The 12 signs are classified in three distinct ways. Once classification, known as the Elements, divides the twelve signs into four groups: Fire, Earth, Air, and Water.


The second classification is known as Qualities, which divides the twelve signs into three groups: Cardinal, Fixed, Mutable. Qualities denote the signs interaction with the outside world.

A third classification divides the signs into two groups named as male and female. Male signs are direct, outgoing and energetic, while Female signs are receptive, introspective and magnetic.

Classification of the Signs of the Zodiac 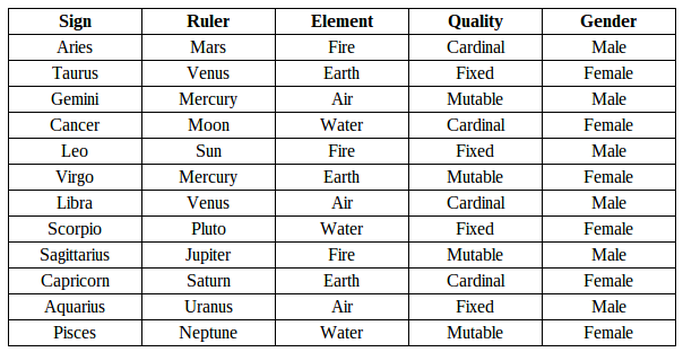 In this way, no two signs are completely the same. For example, there are three Earth Signs; however, no other Earth Sign are both mutable AND female at the same time. Additionally, the astrological signs are said to be “ruled” by one of the planets. A ruler is a planet which serves as the major influence of a sign of the zodiac. Like the signs, the planets carry their own distinct energy and correspondences. Traditionally they are as follows:

Archetypes of the Zodiac

When one refers to his or her astrological sign, he or she is referring to which sign of the Zodiac the Sun was occupying at his or her exact moment of birth. The exact date at which the Sun makes its transition from one sign to another varies, but generally speaking, this occurs about once every thirty days. The sign of a person born on the day that the sun moves into the next sign is determined by the time that they were born. Two people may be born on the same day, and while one person may be considered one sign, the other person can, in fact, be considered another one. This transitory period is referred to as the cusp of that sign.

Take a moment to go back and read the correspondences for each sign as well as the correspondences for their planetary ruler. Notice how the same or similar key words are used for a planet as well as the sign that it rules? For example, the Moon, planet of emotions rules Cancer which is known for being nurturing and emotionally sensitive. Also, notice how a planet rules more than one sign, but the planetary energy affects the sign in different ways. For example, Mercury the planet of communication, intellect and skills rules both Gemini and Virgo. Mercury gives Gemini an adaptability, while encourages Virgo’s perfectionism.


The characteristics attributed to a specific astrological sign do not describe the whole of an individual. To completely understand the personality as a whole, the astrologer must take into account the aspects of a person’s horoscope. A horoscope is simply a pictorial map of the heavens at a specific moment in time, usually the moment of a person’s birth. To draw a horoscope, an astrologer needs three pieces of information, they are:


With this information, an astrologer can draw a person’s horoscope and from it tell a great deal about the person’s character, among other things.