A Spread is a term used to describe the pattern in which Tarot-Cards are laid out after shuffling them and prior to reading them. Usually, but not always, each position in a spread signifies an area of life, a feeling, one's thoughts, or a specific time period such as the past, present, or future. The meaning of a tarot card is read according to its position in the spread.

Overview: This is a classic spread and every Tarot Card reader is familiar with this gem. There are many variations of the Celtic Cross, and the version of the one below is the version that I developed after a great deal of experimentation.  The Celtic Cross is great for specific questions, or when you don't know what to ask. 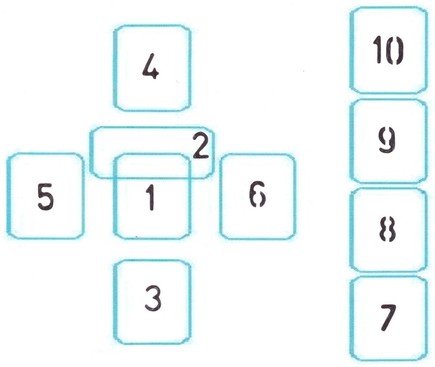 1. The general atmosphere surrounding your question.

2. This card accentuates the first card by compliment, or contradiction.

7. Your attitude, feelings, and opinion.

8. The attitude, feelings, and opinions of others.

9. The best that you can hope for.

10. The final outcome of the situation.

The Clock of Horoscope 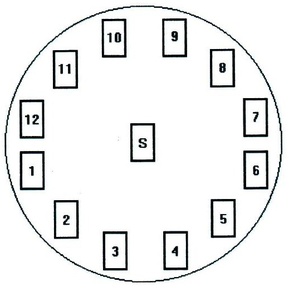 The center card marked S is the Sign Card, which is a card that represents the querent. The other cards represent the astrological houses. Below you will find the area of influence over which each house has sway: 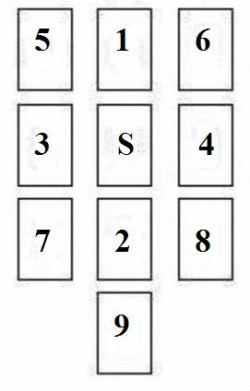 
Directions: To use this spread choose your signifier and place it on the table before you. Shuffle and cut the cards as usual, then deal out the first nine cards as indicated in the diagram above. These nine cards can be read alone for a general reading, or early in one's day for a daily reading.

However if you want a little more depth to your reading, you can deal out an additional 18 cards by starting over at number one again dealing out nine cards, then repeating the process by dealing out an additional nine cards from one to nine again. This will give you three cards for each room. Alternately you can deal out three cards at each position at the outset, it is a matter of personal preference.

Now, if you want to go even deeper, the three cards in each room can be read from left to right as Physical, Mental, and Spiritual. For example, if you deal out the following cards for The Library, which relates to one's past.   The


The four of cups would indicate that the person has been procrastinating on an issue, possibly a decision related to a relationship or personal sense of security. They have low energy (possibly related to depression.)

The two of pentacles, indicates they are mentally concerned with money. So it's clear that their sense of security is dependent upon their ability to provide for themselves. It could be they are deeply in debt, or have gone through financial loss.

The five of pentacles indicates they feel spiritually defeated and have adopted a pessimistic attitude. They feel the universe isn't playing fair, everyone is against them-- furthur contributing to the person's indecision, and depression.

Just as a person's mind, body, and spirit are connected these corresponding cards are connected as well. As you can see, this simple spread can be used on various levels depending on your needs from a quick general reading to more in depth readings.

The Four-Card Cut is not a spread per se but rather a cutting of the cards into four stacks. It has been popularized by Miss Cat Yronwode on the Lucky Mojo Hoodoo Rootwork Radio Hour in the tradition of old-time readers and rootworkers. It is a very easy spread, which I personally have begun to use as my "go to" method of divination for most matters.

To do the four card cut, simply shuffle the cards as usual while focusing your thoughts on the question or issue at hand. When you are done, simply cut the cards in four stacks before you. They are then read beginning from left to right and in the following manner: 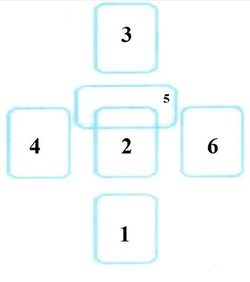 This is a great tarot spread to use before casting any spell. It will tell you the probable outcome of your work allowing you to make changes, if necessary. It can also be used to determine the likely outcome of any plan of action.

To use this spread, choose a card to represent yourself and place it on the table before you. This can represent yourself,or in some cases I have also chosen to use one of the four aces as a signifier for this spread depending on the spell I intended to cast. For example, if I was performing a love spell, I would use the Ace of Cups; or the Ace of Pentacles, for a spell to increase prosperity and bring good fortune to me, etc...

Next, shuffle the cards while thinking of your question. I usually say or think something to the effect of "Please provide me with information pertaining to the spell I intend to cast which will be of assistance to me." When you are done, lay the cards out as they are shown in the diagram above.

This card usually describes what has occurred in the past that precipitated you to cast the spell in question.

This card describes the current state of affairs concerning the situation described in card number one.

This card describes the goal of your spell. This is perhaps one of the most important cards in the spread as it will often reveal your true motivation despite what card number one may indicate.

For example, you or someone you know may be the victim of a bully. Whereas you may think you're casting a spell to protect yourself or another from that bully, this card may reveal that your true intention is revenge and that perhaps you should reevaluate your intended spell or ritual.

This card describes the initial effects of your spell. Again, this is a very important card because it can often tell you how long it will be before you see results, if at all, and whether or not they will last. It may also reveal any circumstances or consequences that you have not accounted for and which may only make the original situation worse.

5. The Best You Can Hope For

This card describes the most you can hope to achieve in the situation at hand and often represents a reality check for the individual. This card may be telling you that you have unrealistic expectations and that perhaps the answer you are seeking lies not in the casting of a spell or performing of a ritual, but in some other means.

This card describes the final outcome and far-reaching consequences of the spell. Again it may also give you an indication of the severity or consistency of the problem that you are attempting to address.  Sometimes a spell will have great results initially, depending on the situation and type of spell, but later break down naturally (classic examples are bindings and banishing) or can be broken by others. 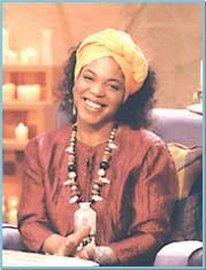 The Four-Doors is a Tarot Spread utilized by the character of Miss Cleo in her many infomercials which appeared on late-night television in the last 1990's and early 2000's. It can be used for specific questions or general readings.

The Four-Doors spread is a pretty straight-forward spread, however some readers may be intimidated from using it as the card positions do not have any designations as in other spreads (the past, the present, how you feel, the near future, the outcome, etc...). Without designations for each position in the spread, the reader is forced to look at the cards before him or her both individually and as a whole to intuit from them the information the cards are attempting to communicate.

However, as with any tarot spread, your accuracy with using the Four-Doors will depend on your level of understanding of the Tarot, your skill-level, and your amount of gifted-ness with reading cards in general.

The spread begins by shuffling the cards. When you are done they are cut into four stacks before you.

Next, turn over the top card in each stack and place it face up above its corresponding stack.

Finally, turn the top card in each stack over and leave it on top of its corresponding stack.

Miss Cleo also sometimes made use of a three card spread which is laid out in the same manner. However in this case the cards are cut into three stacks instead of four and they are read from Left to Right as the Past, Present and the Future.

What is a Tarotscope?

Like a horoscope, a tarotscope can be thrown for any time-period that you desire. Popular choices include at the beginning of the New Year, or the beginning of each month, at the change of the seasons, etc...The cards are read both individually as a whole to paint an overall picture of the themes, challenges, and opportunities that will come your way within the given time period.