What is a Jack Ball? 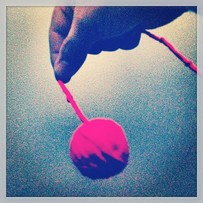 Although they resemble a pendulum, jack-balls are similar to mojo bags in that they each hold herbs, root, and/or curios which are believed to attract or repel certain influences. In this way they are both a type of containerized spell, much like a bottle-spell, or a honey-jar.  However, whereas a mojo bag is thought to be a spirit in and of itself the jack-ball is more an extension of one's own spirit, will, or consciousness.

In addition, mojo-bags are kept on one's person, in a pocket, purse, or pinned to the inside of one's underwear and act passively to attract your desires; by contrast, however, the jack-ball is proactively worked by swinging it by the tail to build up and release energy towards the accomplishment of your goal. By focusing one's attention on the swinging ball, I believe that the operator goes into a light trance conducive to exerting their will onto the external world.

How to Make a Jack Ball

Waking Up Your Jack Ball

Upon receipt of your jack-ball, remove it from its accompanying mojo bag and hold it up to your mouth saying: “As God blew the breath of life into Adam, so now do I blow the breath of life into you. In Jesus name. Amen.” Take a deep breath and blow upon the jack ball and imagine a portion of your own vital life-force entering the ball. Hold the ball between your hands and continue by saying: And with this life, I give you purpose (here state your purpose). In Jesus name, Amen. ”

When you are done, feed it a few drops of your first morning’s urine and make the sign of the cross over it three times saying:  [N] I baptize your in the name of the Father, the Son, & the Holy Ghost. Amen.” Having done this, your jack-ball is now ready for use.

When not in use, your jack-ball may be carried on your in your pocket, purse, briefcase, back-pack, etc… or stored in a safe place. Alternately, it may be given a place of honor on your altar, or placed under your pillow at night to provide wisdom and guidance through your dreams. Once a week it should be fed a few drops of your urine or whiskey to keep it strong and vital.

How to Use Your Jack Ball

Write your petition on a piece of brown paper-bag that has been torn on all four sides by hand and tuck it in a mojo-bag (included) along with your jack-ball. Carry the mojo on your person next to your skin for seven days. Feed your jack-ball a drop of your urine each morning to build up its strength and call it by name and state its purpose for being.

After the first week, you can begin working your jack-ball. To do this, remove it from the mojo-bag and holding it by its tail swing it around and around in a clockwise circle (counter-clockwise if you are trying to move something away from you) and make your petition with a prayer from the heart, by reciting biblical scripture (such as Psalm 23), or by stating your intent over and over in a rhythmic fashion. For example, if you wish to attract prosperity you may wish to repeat “money come, money flow, money stay, money grow” over and over again as you swing the jack-ball in circles.

Your jack-ball may be worked alone or in conjunction with other forms of magic. For example you may wish to fix a candle and dress it with a condition oil which resonates with your goal and burn its corresponding incense while operating your jack ball. Finally, you can increase your chances of success by working with the moon. If you wish to draw something towards yourself, work while the moon is going from New to Full (growing); to move something away from yourself, work while the moon is shrinking (i.e. going from Full to New.)

When you are done, place your jack-ball back inside your mojo bag with your petition. When your desire comes to pass, burn the petition and replace it with one describing a new goal you wish to manifest.

Divination With Your Jack Ball

A pendulum is a tool used for divination to answer subjective questions.  They take the form of a weighted object, called a bob, suspended from a length of string, cord, or chain. Although any weighted object can be used, in the Hoodoo Tradition the most common object used to make a pendulum is dried Queen Elizabeth Root, with High John the Conqueror Root coming in a close second. Finally, in addition to being used as a tool to bring about your wishes, you can jack-ball can be used as a pendulum to answer your questions and giving your guidance.

Before using your jack-ball as a pendulum it must be, calibrated, or programmed. To do this, hold your pendulum by its tail between your thumb and forefinger. Place your elbow on a tabletop, and lower the ball to within an inch of the table surface. Speak to your jack-ball, call it by name and say “show me yes.” Note which direction the pendulum swings. Next, ask “show me no,” and note the direction in which the pendulum swings. Finally, ask “show me I don’t know,” noting the ball’s direction.

As we have seen, a well working pendulum accurately responds to questions you ask it with either a ‘yes’, a ‘no’, or simply ‘I don’t know’. The simplest way to use the pendulum is by asking it straightforward questions such as:


However, by asking the pendulum a series of questions starting out with a broad scope and progressively narrowing down the variables you can arrive at specific answers such as people, places, dates, times, etc…

In another instance you may have a number of potential mates from which to choose to pursue a relationship. You may write their names down on a piece of paper and hold your pendulum over the list asking “Are any of these people a suitable mate for me?” If the pendulum gives the affirmative, you can then go over the names one by one asking the pendulum to reveal those potential suitors who are incompatible with you at this time.

The same process can be used to determine the identity of a thief, a hidden enemy, the name of a person who cursed you, determine the location of a lost item or even a hidden trick, etc…  To make the process easier, specially designed charts can be drawn on paper which includes all possible variables. The question can then be posed to the pendulum and it will swing in the direction of the correct answer.
See Also:
Mojo-Bags
Hoodoo Luck Balls (Mary Alice Owen)