What is a Pendulum?
​ 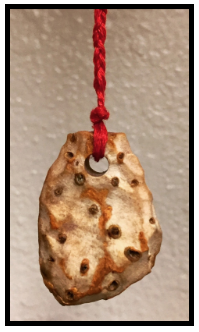 A pendulum is a tool used for divination to answer subjective questions.  They take the form of a weighted object, called a bob, suspended from a length of string, cord, or chain. Although any weighted object can be used, in the Hoodoo Tradition the most common object used to make a pendulum is dried Queen Elizabeth Root, with High John the Conqueror Root coming in a close second.

They are typically made by drilling a small hole in the dried root and then running a threaded needle through the hole. The thread, which is traditionally colored red, is knotted at the end to prevent it from slipping through the root.
​
Alternately, the root can be wound around and around with the red-thread until it forms a ball. The ball is then secured and a tail of about 6 to 8 inches is tied off to allow for the pendulum to swing.

​Before using your pendulum it must be, calibrated, or programmed. To do this, hold your pendulum on its thread or chain between your thumb and forefinger. Place your elbow on a tabletop, and lower the bob to within an inch of the table surface.

Where Do Answers Come From?

When people start working with a pendulum, they often wonder what exactly makes the pendulum swing. Some folks believe that their spirits, or even God, causes the pendulum to swing, giving them the answers to their queries.

However, other folks believe that their answers originate deep within their own subconscious, that part of the brain responsible for instinct and intuition, and that their mind produces tiny, almost imperceptible, tremors in their bodies that cause the pendulum to swing.

No matter where you believe your answers originate, many practitioners have shown that with continued use and practice you will find your pendulum to be an accurate and useful source of information.

​How Pendulums are used in Hoodoo

​People have been known to avoid using a pendulum because unlike other forms of divination such as tarot-cards, playing-cards, tea-leaves, astrology, etc… it seems less exotic and mysterious. Some feel that the pendulum is less reliable because it can be easily influenced by the operator either consciously or unconsciously.

The important thing to remember here is that although the pendulum is a common, easily accessible, tool it does require a certain amount of training and experience to master. Like any tool of divination, it should never be used when you are nervous, upset, or ill, so as to avoid confusing or erroneous answers.

Once a person is comfortable working with a pendulum it can become an invaluable tool with several application in the practice of conjure. These applications range from the mundane to the sublime and include the following.

As we have seen, a well working pendulum accurately responds to questions you ask it with either a ‘yes’, a ‘no’, or simply ‘I don’t know’. The simplest way to use the pendulum is by asking it straightforward questions such as:


However, by asking the pendulum a series of questions starting out with a broad scope and progressively narrowing down the variables you can arrive at specific answers such as people, places, dates, times, etc… For example, rather than asking “Will I get a new job soon?” You might ask “Will I get a new job within the next month? Week? Monday? Tuesday? Wednesday?” Continue this line of questioning until you arrive at a specific date.

In another instance you may have a number of potential mates from which to choose to pursue a relationship. You may write their names down on a piece of paper and hold your pendulum over the list asking “Are any of these men a suitable mate?” If the pendulum gives the affirmative, you can then go over the names one by one asking the pendulum to reveal those potential suitors who are incompatible with you at this time. The same process can be used to determine the identity of a thief, a hidden enemy, the name of a person who cursed you, determine the location of a lost item or even a hidden trick, etc…

To make the process easier, specially designed charts can be drawn on paper which includes all possible variables. The question can then be posed to the pendulum and it will swing in the direction of the correct answer. Below is an original pendulum chart which I have designed to assist you in choosing the most appropriate mode of magic for your personal situation.

Determining Ingredients for Workings
​
In addition to divining answers to questions, a pendulum can assist you in choosing the correct herb(s), mineral, or curio for your working. Begin by gathering all the potential elements you wish to use to create your spell, mojo-bag, doll-baby, etc… Then by using the same process of elimination above hold your pendulum over each herb, mineral, and/or curio and ask the pendulum “Is this [item] appropriate for this working?” and eliminate those items which the pendulum does not deem appropriate for your purpose.

Granted, depending on what you have on hand this may be a long, drawn-out process. However, again, by process of elimination you can determine the ingredient by starting out with a broad scope and progressively narrowing down the variables. For example you might ask “Is the ingredient an herb? a mineral? a curio?” and so forth and so on until you arrive at the correct ingredient.

As a spiritual practitioner, it is not uncommon to come into contact with disincarnate entities such as Gods, Saints, Spirits of the Dead, etc…Some folks have the innate ability to communicate with these entities or have developed their the ability to a point in which they can communicate with spirits on some level. Others have learned to utilize tools such as Ouija-boards, tarot cards, or cowry shells.

Pendulums are excellent oracles that help give a voice to disincarnate spirits. They can be used to communicate with any disincarnate entity by addressing the entity and asking it to communicate with you through the swinging of the pendulum. If you have a physical representation of the being such as a statue, spirit doll, or symbol, you can suspend the pendulum over it and say something such as

If the pendulum gives the affirmative then proceed with your questioning. When you are through thank the spirit or being for the information imparted.

Using this basic method, I have communicated with Spirit Dolls, The Ancestors, the spirit of living plants, I have spoken with spirits of the dead at their gravesite (see above) and even the ghosts of an individual who was bound to their earthly home.

Pendulums are tools of divination which are easily accessible to the average person and can even be created with simple items you probably have in your home right now. Once properly made they should be programmed to determine the directionality of their answers. Although they may seem less mysterious and exotic than other forms of divination they require a certain amount of training and experience to master. A well-working pendulum which has been programmed and used by a person who has invested the time to learn how to properly utilize it has a wide variety of application such as divination, communication with disincarnate entities, and helping the worker make wise decisions about his or her workings.