What is a Magic Square?

Albrecht Dürer's Magic Square
A magic square, or kamea, is a representation of spiritual forces in a mathematical format. They are typically arranged in such a way that any row is equal to the sum of any column.

While there are numerous magic squares, this section will deal with only those squares associated with the 7 classical planets. Each of the seven classical planets  have both a Seal and a Kamea, or Magic Square. Whereas the Kamea sets forces in motion, the seal brings them to a halt.

There are other energies and forces associated with each Kamea, for example the intelligences and spirits; however, for the purpose of this article we will speak only of the squares themselves as well as their seals.

The Magic Squares & their Correspondences

How Magic Squares Can Be Used in Hoodoo

Those familiar with the Seals of Solomon and their uses in Hoodoo should have no problem making use of magic squares and there are a number of uses for them. They are popularly used in the creation of sigils. To make a sigil, or magical symbol, using a Kamea you must first determine a keyword that best describes your goal. For example, if your intent was to be a successful physician, you might choose the word ‘doctor’ to represent yourself as being successful in your chosen vocation.

Using the Western system of Numerology, render the keyword to its numeric equivalent:


Now add up all the numbers that correspond to the letters making up the word,

Now choose a square which corresponds to your goal. As in the example above, Jupiter rules success in one’s chosen profession. Draw a circle around the first number in the given sequence signifying the start of the sigil, then draw a straight line to the next number in the sequence drawing a parallel line across the last one signifying the end of the sigil. In the case of a number appearing twice in a sequence, this is symbolized by two triangles joined at the upper-most point. Finally, draw a square around the number which corresponds to the sum of the digits. 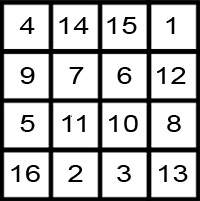 This will result in a sigil of the keyword. This sigil can then be used to create a talisman, or it can be drawn on a candle to represent one’s goal, written on a piece of paper and tucked into your pocket, or a mojo bag. 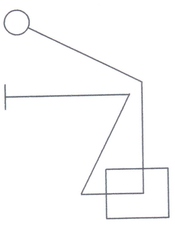 You can use this process to manifest, attract, or dispel virtually any influence you desire. For example, to manifest a new car you may create a sigil for the words "new car" on the Square of Mercury, which rules travel. To get a job or promotion you may sigilize the job title you desire on the Square of the Sun for success.

Putting the "Magic" in Magic Square

Folks who find creating sigils somewhat difficult may utilize magic squares by simply creating a blank square and lightly drawing in the numbers with pencil. Next, you would ritually draw the numbers in the square as you focus on your intent. When using a magic square in this manner, I typically mutter an affirmative prayer over and over as I draw in the number. If you desire, you may turn the square over and write your petition or prayer in a more direct manner.

Once you have your sigil or magic square, just what are you to do with it? A sigil may be carved on a candle, drawn on paper and placed in a doll, under a candle, in a mojo bag or worn in the shoe! A magic square may also be used in the same manner. In the case of sigils or squares drawn on paper they may be anointed with condition-oils (or sexual fluids in the case of love or sex spells) and/or smoked in incense before deployment. In addition they can be printed out and glued to Vigil Lights, spell bottles,  or painted on magic boxes. It may be helpful to think of your sigil or square as another form of petition.

You will find that your sigils and squares are much more powerful when you utilize those colors, herbs, times etc...that resonate on the same vibrational frequency in your spells. For example, for maximum power they should be created on the day with which they are associated. Ceremonial magicians who make use of magic squares not only take into account the day but also the hour in which a sigil is created.

For example, a sigil for second-sight may be created on a Monday in the Hour of the Moon. Magicians have formulas for determining the planetary-hours of the day or night. However, it should be noted that the first hour of daylight each day is associated with the planetary energy that corresponds to that day. Therefore, you would likely make your second-sight talisman at sunrise on a Monday. If this is not possible, you may wish to perform your operation when both clock hands are rising.  In addition, it may be drawn in silver ink, smoked in herbs known for developing psychic ability anointed with a condition oil for second-sight and placed under a fixed silver candle which is then lit with your positive prayers.

On the Use of Planetary Seals

You may recall at the beginning of this article I mentioned that each planet is associated with a magic square as well as a planetary seal. Whereas the square sets forces in motion, the seal brings them to a halt. What this means is that the seals are used to ward off, repel, or lessen the negative influences of the energy associated with the square.

For example, Mercury, the planet of communication and travel, goes retrograde about 3 times a year for approximately 3 weeks at a time. What this means is that from our view on earth, the planet Mercury appears to be moving backwards in its rotation around the sun.  During such a retrograde those areas of life ruled over by Mercury are often disrupted.

To shield themselves from such disruptions a person might ritually cover the square of Mercury with the Seal of Mercury and places this under a candle. The candle may be burned for a few minutes each morning along with one's prayers or petitions for things to go smoothly in the realm of travel, communication, etc...Alternately, the Seal of Mercury may ritually drawn on paper, anointed with Mercury Oil and placed in a mojo bag along with other protective herbs, roots and/or curios.

In like fashion, the Seal of Venus may be used to dispel unwanted lovers; or the Seal of the Sun to keep from losing a job or promotion. These are just a few suggestion on the use of the planetary seals. The clever magician will find a myriad of other applications for these powerful symbols.