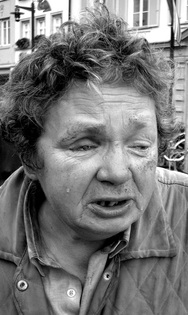 The Boo-Hag, the Hag that Rides You, or simply Hags are terrifying entities found in cultures all over the world and by many other names. They are described as both ugly, older women as well as young, beautiful ones. In either case, they may or may not be witches but who are always possessed of strong spiritual powers.

Hags are believed to remove their skin at night and sneak into their victim's home to drink their blood, steal their voice, or give them nightmares. A common behavior of the hag is to 'ride' the victim in his or her sleep depriving them of needed rest. Over long periods, individuals have died of exhaustion. People who claim to have been "hag-ridden" report waking up in the night with a sensation of something heavy on their chest and being unable to move. (See sleep-paralysis). These victims often report being tired and exhausted the following day after having not gotten a good night's sleep.

Methods of combating the Hag include laying a loaded shotgun across the head of the bed, since Hags detest the smell of gunpowder (sulfur). Forks have also been placed under the pillow to prevent being ridden. Other tools used to ward off Hags include placing a straw-broom or a colander under the bed in the belief that the Hag would have to count every straw or every hole distracting her until the sun would come up.

If a hag was caught in the daylight without her skin, it was believed that she would die. Some folktales tell of people finding the Hag's skin hanging in her closet and filling it with salt which is said to burn and severely injure her when the Hag puts her skin back on.
Photo "Sad Bag Lady" courtesy of http://morguefile.com/archive/display/23485------In another time, this woman living on the fringes of society would have been a prime target of suspicion for being a Hag.