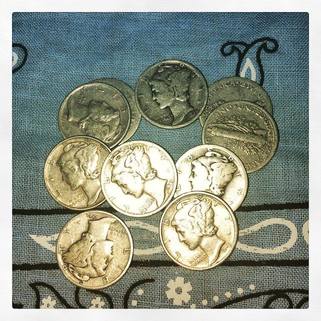 Silver Dimes
Mineral Curios are those curios which are made up on naturally occurring minerals. Examples of mineral curious include but are not limited to, the following:


Most of these associations were developed through application of the Doctrine of Signatures, a belief which holds that the Creator (i.e. God, the Universe, etc...) marked everything in existence with a sign, or signature, which indicates its intended use.  Furthermore, by careful observation one can determine the uses of a plant from an aspect of its form such as the shape of its roots or leaves, its color, place of growing, or even its name.

Selected Mineral Curios and their Uses