How to Hoodoo with Doll-Babies 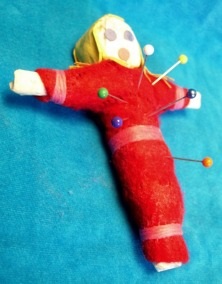 When it comes to using Doll-Babies in magick, most people are familiar with the stereotypical image of the "Voodoo" doll stuck full of pins to cause suffering and grief for one's enemies. Historically, various types of dolls were used to gain love, empower individuals, bring about healing, and secure prosperity in addition to punishing one's enemies and staving off rivals.

The process of manipulating images to effect their physical counterparts is believe to have originated in paleolithic times. Although no dolls from this period in history have been recovered, it has been theorized that cave paintings depicting successful hunts were actually a form of magick, called sympathetic magick, which states that like attracts like. Sympathetic Magic forms the basis for many spells and rituals.

Sympathetic Magick works on the principle that ‘invisible bonds connect all things’. Sympathetic Magick can be divided into two categories, Homeopathic Magick and Contagious Magick. The Scottish anthropologist Sir James G. Frazer first described these types in his book The Golden Bough (1890). 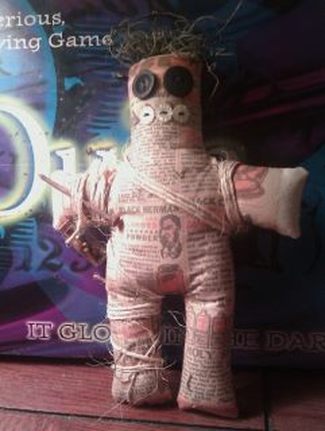 Protection Helper Doll Courtesy Denise Alvarado
There are several different types of dolls which can be found in the practice of magic. By types, I am not referring to the materials used to make a doll-baby but rather the purpose for which it was originally created. These are just a few.

1) Spirit-Dolls: These are dolls which act as vessels for beings of powerful spirits who can be petitioned for a wide-variety of purpose.  These spirits can be the spirits of the dead, familiar-spirits, Divine-beings, a spirit-of-divination, and even spiritual entities which have never had an earthly incarnation. These types of dolls are often found on altars where they are objects of devotion. They are often petitioned with offerings such as water, candy, cigarettes, coffee, etc....to invoke their power in the life of the individual.

2) Helper-Dolls: Comparable to mojo bags, these types of dolls are personifications of concepts or energies that the individual wishes to draw into their life. They often serve one specific purpose such as protection, money-drawing, uncrossing, etc... They are often sewn in colors and stuffed with those herbs and curios which are directly associated with your intent.  For example, a Love-Drawing doll may be created in red cloth and stuffed with coriander seeds, Queen Elizabeth root, lavender buds, cumin seeds and a list of qualities that you desire in a lover. Such a doll would be worked at your love-altar and wrapped in clean, white cloth in a special box under or near your bed when not in use. It is wise to think of these dolls as working with you rather than for you.

3) Doll-Babies: These dolls are made to represent a specific person. For this reason they are often made out of the individual's used clothing (whenever possible), contain their personal concerns or at the very least their name written on a scrap of paper.  They may made of plastic, wax, cloth, twigs, etc...and only look like a generic human being, they may be made in a color of cloth that is associated with your intent, and sometimes a worker will take a photograph of the person's face and sew or glue it over the face of the doll. In other cases, they will resemble the individual they are intended to represent as much as possible with hair the same color as the individual and buttons the same color as their eyes, as much as possible they will have the same body type and be dressed in a manner of dress associated with the individual. These types of doll-babies can be made of specific people who's identity is unknown to you. For example, a doll made to represent an unknown person who put a curse on you may be made out of black cloth, stuffed with cayenne pepper and the words "the person who cursed me" written on a scrap of paper.

4) Effigies: These are dolls that you have crafted to represent yourself. Luisha Teish, author of Jambalya: The Natural Woman's Book of Personal Charms, and Practical Rituals calls these Little Soul Dolls. They are crafted in your own likeness and contain your personal concerns. Once formed, the doll becomes you and should be treated the way in which you want to be treated yourself. It can be worked for virtually any purpose that concerns you, your health, condition in life,  or well-being. For example, a working to enhance your sexual attractiveness may consist of you stroking the doll and pointing out all the things that are beautiful about you. When not in use, the doll should be wrapped in a clean, white cloth, and hidden in a place where it will be safe.  Do not leave your doll unattended for too long but give it the love, attention, and encouragement that you would a child.

How to Make a Doll-Baby 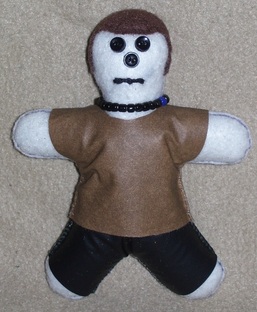 A Poppet
There are many different ways in which dolls are made, however, perhaps the most important element in doll making is you! As you make your dolls it is important that you mentally focus on the individual that it is intended to represent or the purpose the doll is to fulfill.

1) Ready Made- Perhaps the easiest way to make a doll-baby is to purchase a store-bought doll such as generic doll or an action figure. The doll is cleansed by wiping it down with ammonia and incorporating the personal concerns of the individual it is intended to represent into the doll.

2) Waxen Images-  Many spiritual practitioners are familiar with male and female image candles which are often used in candle magick spells. However, these little images can just as easily be used in the same manner as a waxen image, because that is exactly what they are! To prepare such a candle as a doll-baby you can simply scratch the person's name across the chest of the doll. If you have personal concerns, or wish to incorporate herbs and roots into your doll, the candle will have to be loaded. To load the candle, bore a hole in the bottom and fill this with your herbs, personal concerns, etc.. and then fill the hole back in with wax to seal it in

3) Poppets- Another option is to make a poppet. A Poppet is made from two pieces of cloth which are cut in the shape of the human body. This cloth can also be something that the individual has worn, or simply a colored piece of cloth that matches your goal. The pieces are sewn together, turned inside out, and stuffed with cotton, herbs, straw, gems, etc. If you have a link to the individual, add that to the poppet as well.  Finish by sewing up the opening used for stuffing. Next, personalize the doll giving it the features of the person it is intended to represent. When you have finished, wrap the doll in a clean cloth until the spell or ritual is to be performed.

Baptizing, or ritually-naming, your doll calls a portion of that person's spirit into the doll. After the baptism, the spiritual connection is made between the doll and the individual so that what ever occurs to the doll will occur to the individual as well.

To baptize your newly created doll, sprinkle it with some holy water and then make the sign of the cross over it three times saying:

"In the name of God, the Father; God, the Son; and God, the Holy Spirit I baptize you as (Name of Person). All that I do to this doll, I do to him/her. Amen."

When your doll has accomplished its assigned task and you don't need it anymore. It is important to release that part of the person's spirit before you dispose of the doll. To release the spirit, simply make the sign of the cross over the doll and say:

"Let my words which bound you, now set you free that you may return from whence you came. In the name of the Father, the Son, and the Holy Spirit. Amen."

Disposing of Your Doll Baby

Similar to candle-remains, disposing of your doll-baby encompasses a wide range of options for the spiritual practitioner. Some spells include instructions for disposing of a doll as part of the working. For example, a mirror-box containing an enemy's doll may be buried at the grave of a powerful spirit where it will be kept down.

How you dispose of your doll will largely depend on what the doll was used for. In most cases, you can simply release the spirit of the doll, remove any personal concerns and simply throw the doll away. If you are inclined, it may be burned, buried, thrown in running water, or left at a crossroads.

In some cases, the craftsmanship of a doll may be so beautiful and elegant that you will want to keep the doll as a work of art to be admired. In this case, release the spirit of the doll, and remove any personal concerns. Then you can display your doll as desired.

I strongly suggest that you dispose of your doll in a manner consistent with the work. If the doll was for a positive purpose and worked well for you, it should not come to a violent end such as burning or being thrown in water but rather buried with honor.  If you are unsure of how to dispose of your doll, perform a divination or petition your spirits for answers.