HOW TO READ AN EPHEMERIS
​ 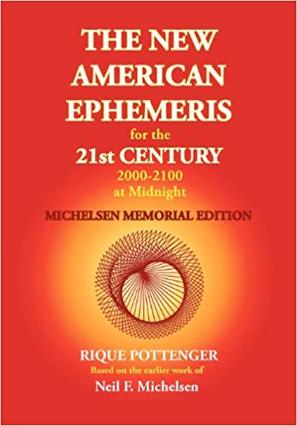 What is an Ephemeris?

An ephemeris is defined as “a table or data file giving the calculated positions of a celestial object at regular intervals throughout a given time period.” They are used by astrologers to track and pinpoint the movement of the planets so that they can determine where they are located on any given day.

Perhaps the most well known ephemeris is The New American Ephemeris for the 21st Century, which covers the year 2000 to 2100. However, some folks may find it somewhat expensive and if you are using the ephemeris to erect birth charts the old fashioned way, as opposed to a computer program,  it will not be usable for those years prior to the year 2000. In these cases, the ephemeris is an invaluable tool used in predictive astrology. With it can you check aspects between transit planets and the placement of your birth planets; or quickly scan the tables to see when a planet changes signs, turns retrograde or moves direct. Typically it will also give the dates of solar and lunar eclipses and they signs in which they occur.

The times and dates given in this ephemeris are calculated for Midnight UT (Universal Time) therefore, depending on where you are, you will have to convert the times to your location. For instance:


However, you would subtract one hour less during  During Daylight Saving Time.

For those who may not quite be ready to invest in such a tome, there are alternatives. For instance, you may purchase a smaller book such such as Llewellyn Astrological Pocket Planner which is a daily ephemeris and aspectarian for any given year. Unlike the ephemeris mentioned above, the pocket planner is only good for one year and the times are given in both Eastern and Pacific time.

If you have a smartphone, you can purchase iPhemeris from the app store. This app has the benefit of being able to use it in perpetuity and you can set the time to your individual location eliminating the need to convert time.

Finally, you can find ephemeris tables online with a simple google search.  However, these are often set to Universal Time (UT) which will, again, require you to convert the times given to your location.

The Anatomy of an Ephemeris

For the purpose of this article, we will be using the New American Ephemeris for the 21st Century. The image below is for September 2018 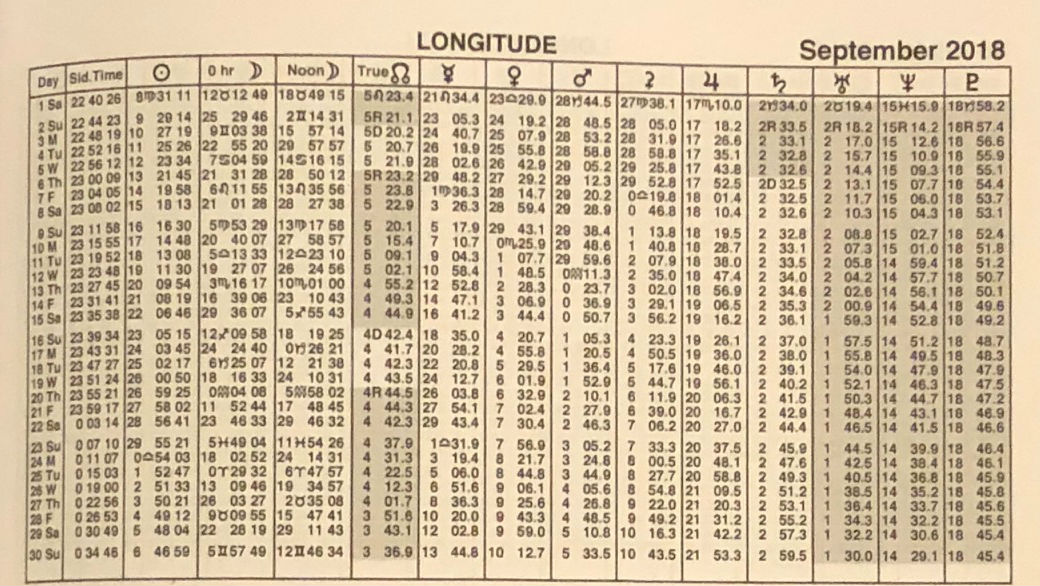 On the top row we see the day of the month, sidereal time, and then the symbols for the planets beginning with the Sun and ending with Pluto.  The positions for the Moon are given for both midnight and noon and next to this is the position for the North Node. The columns show the position of each of the planets at midnight each day in degrees, minutes, and seconds. For example, if we look at the table above we see that at midnight on September 1st the Sun was at 8 degrees, 31 minutes, 11 seconds of Scorpio.

The shaded areas in each column indicate planets that are in retrograde. For example, looking at the chart above we see that Saturn starts off the month retrograde in 2 degrees, 34 minutes, 0 seconds of Capricorn. It turns direct sometime between midnight on September 5th and midnight September 6th. In order to determine the exact time, we can look to the bottom of the page for a little box on the left labeled Astro Data. The top portion is for the month of September and the bottom portion is for October. Again, looking at the second line of the top portion, we see the symbol for Saturn and a capital D followed by 6  11:08. This means that Saturn turns direct on 9/6/18 at 11:08 AM UT. Since I live in the Pacific Northwest, I would subtract 7 hours to determine what time Saturn turns direct where I am. Therefore Saturn will turn direct on 9/6/18 at 4:08 AM where I live.

These tables provide a plethora of information.  For example, the Planet Ingress indicates the date and time a planet enters a new sign.  Let us take Mercury for example. Mercury starts out the month in 21 degrees Leo and remains there until 9/7 where it is is then in Virgo. Since these times are for Midnight, Mercury left Leo and entered Virgo sometime in that 12 hour period. If we want to know exactly when he changes signs we look to the Planet Ingress section of the ephemeris. Again the top portion is for September and the bottom portion is for October.  Looking at this section we see that Mercury enters Virgo on 9/6/18 at 2:39 am (UT). Again, since I live in the Pacific Northwest I would subtract 7 hours to determine when this occurred in my time zone, which translates to 7:39 PM on 9/5/18.

Now let us say I want to know when and where the New Moon will occur in September. I look to the Phases and Eclipses section of the ephemeris. I look to the top portion for September and I see the symbol for the new moon and it occurs 9/9/18 at 18:01 in 17 degrees Virgo, which converts to 11:01 AM in the Pacific Northwest where I currently live.

Finally, the Last Aspect / Ingress area of the chart is for determining when the moon is Void-of-Course.  The Moon is said to be void of course when it makes its last major aspect to another planet before entering a new sign.  It is believed that anything undertaken during the moon void of course will not bear fruit. For example, during such a time folks will refrain from making any major decisions, submit resumes, take action against enemies, make large purchases, start a new project or job, etc.. Instead, these are times of prayer, devotion, meditation, journaling, and introspection.

Looking at the bottom of the ephemeris the Last Aspect / Ingress section on the left is for September and the one of the right is for October. We see that the first Void-of-Course moon for September will occur on 9/2/18 between 5:58 am and 8:02 am UTC.

The Ephemeris and You
​

Once you are familiar with how to read an ephemeris, you can being to see how this information relates to your own chart by tracking your transits.
My Astrology Pages