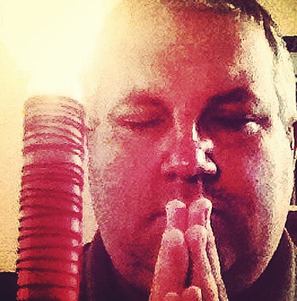 Folks often ask me, "Carolina Dean, how did you learn about magic, witchcraft, and hoodoo?" I usually reply that the short answer is that I learned from books, classes, various people who have come in and out of my life, from spirits, from experiences, and even from my own mistakes. However, for those that want a more specific answer I can site the following sources for my knowledge and experiences.

I learned about signs and omens from my grandparents who raised me from a very early age after my parents divorced. For example, I learned that if the Sun sets behind a cloud it means rain; and that an itching palm means money on the way. My grandmother showed me how you can find a lost cow by asking a Daddy Long-Legs spider which way it went after which the spider would point one of its legs in the direction to look. I also learned about magical timing from them by consulting the Farmer's Almanac to find the moon sign. I learned never to have dental surgery when the moon was "in the head" or else you might bleed to death; or to wean a baby when the moon is "in the knees".

My first encounter with real magic, outside my family, occurred in the summer of my sixth year. After my parents divorce, my mother didn't have a car so we had to walk everywhere. I had developed warts all over the back of my hand and my grandmother told me that it was because I let a frog pee on my hand. To get rid of the warts, my mother walked me to a healer's house on one of the back roads leaving out of town. The little old lady performed a ritual to "take off" my warts that entailed her rubbing a penny over them while praying. My mother was then instructed to take me to a public place where I was to give the penny to the first stranger I saw, which we did. Unfortunately, the magic ultimately failed and I had to have the warts painfully burned off, but having the ritual performed over me really awoke something in me and began my interest in pursuing an education in the magickal arts.

In my early 20's  I worked as a cashier (and later as a bookkeeper) at my local Piggly Wiggly.  I kept my mouth shut and my ears open and I learned a great deal from different customers and co-workers by being respectful of their beliefs and showing gratitude for what they were willing to share with me. I particularly recall a number of men would reach into their pockets to pay me with change and I would often notice that they were also carrying a buckeye. I even found a buckeye (1) on the sales floor one day and carried it myself for many years before it was lost (or moved on to another owner)

I began studying card reading with playing cards (2) in the 10th grade, around 1989, after reading a magazine article on the subject.  However, it wasn't until 1991 that I was given my first Tarot Deck (3) from my Aunt Ernestine who bought it for me from a Walden-books in Myrtle Beach South Carolina. She nurtured my interest in the subject and took me to visit the gypsies who told fortunes and gave out spells to their clients. I learned to read the Tarot from the books that came with them. Mary Greer, and Eden Gray (4) were a huge influence. Through my interest in Tarot, I became interested in Wicca and witchcraft.


In 1992, I began corresponding with a Priestess named Lady Eagle after responding to an ad in the back of an issue of "Llewellyn's New World of Mind, Body, and Spirit". (5) Through our correspondence Lady Eagle taught me about medicine bags, how to meet and work with my totem, and how to align myself with nature. She would send me messages through her totem, the Eagle, and I would write to her telling her about the message I received after which she would confirm my accuracy.

Embracing Wicca as my spiritual path, I identified as Wiccan and later as Pagan for many years before coming back round to Hoodoo and Rootwork. My influences included Scott Cunningham, Silver Ravenwolf, and Raymond Buckland.  When I worked in the cotton mills in Fort Lawn, S.C. I met and became friends with Rhonda who identified as a witch and who was a graduate of the Frosts School of Witchcraft, she taught me a lot about working with wax dolls, casting powerful curses and how to perform love spells over open fires... She had a penchant for hanging out in graveyards and it was with her that I first learned about working with the dead and the use of graveyard dirt.

I learned about, candle spells, herbs, and sex-magic from a friend who called herself "Angel" who was raised in New Orleans and who practiced her family's tradition of witchcraft, Voodoo, and magic. Though she identified publicly as Wiccan she was not all "love and light" and taught me both the right and the left hand path. (6)

As a volunteer with WARD's (7) Pagan Prison Ministry I went into Prisons all over S.C teaching a Wicca 101 (8) course that I co-authored with Angel. I frequently corresponded with inmates who identified as Wiccan, Pagan, Witch and also those who were practitioners of Native American Spiritual practices, Ceremonial Magicians, and folk magicians all of whom I learned from as well through our letters and exchanges.

I learned about the power of dreams by selling lottery tickets to little old ladies with their dream books as an In-Store-Coordinator with Winn-Dixie in Beaufort, South Carolina where I moved to in 2005 (9).  I spent a lot of time exploring Beaufort searching for the grave of Dr. Buzzard as described in Roger PIckney's book Blue Roots. I learned about the scientific aspects of ghost hunting from ghost-hunters and explored the ruins of Old Sheldon Church (10).

In February 2005, I discovered a candle-shop hidden inside a music store (11) next door to the local H&R Block. In addition to the CD's and tapes, they also sold African Tribal art and jewelry, incense, religious-beaded necklaces, mortar and pestles, etc... The owner had a wall full of shelves of glass encased candles in every color imaginable but without any labels. You could speak to him about an issue or condition and he would prescribe a candle and tell you how to burn it for luck, love, money, success. As far as I could tell he did not have an altar on the premises nor did he burn candles for you. I bought about five candles from him before moving to Whidbey Island the following year.

In 2003 I began Cat Yronwode's Lucky Mojo Hoodoo Rootwork Correspondence Course, however, due to my having lost a job and moved several times I did not graduate until 2009 (12). Though I had knowledge of Southern Folk Magic practices, I feel Cat's course rounded out my that knowledge and gave it a bit more structure. I also learned things from listening to the Lucky Mojo Hoodoo Rootwork Radio Hour. I have been particularly influenced by Miss Cat's four card cut and the practice of prescribing spells based on divination with the tarot. I gained a deeper understanding about working with my Ancestors from Denise Alvarado and Madrina Angelique by taking some of the early courses with Crossroads University.

I have been a member of a handful of magical groups (13) who met regularly to perform rituals, teach one another, and socialize. The first magical person I met on Whidbey Island was  a British Traditional Witch with an encyclopedic knowledge of incense, herbs, and herbal magic. However, due to the constraints of her coven's rules against sharing knowledge with anyone outside her coven and the fact that besides our interest in magic and witchcraft we drifted apart.

Later, I formed my own group made up of a three other individuals of eclectic interests and paths. I had high ideals for my group and wanted to get them involved in community service. I envisioned our coven adopting a highway to pick up trash, holding public rituals, and open classes to expand the general public's awareness of Wicca and Witchcraft (14)