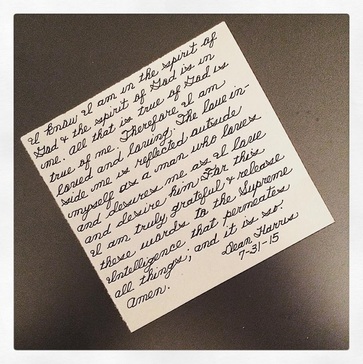 A petition is a request or wish written on a piece of paper. In the Hoodoo tradition, one is typically advised to write one's petition on brown paper torn, usually from a grocery type sack, on all four sides by hand. This is thought to make the paper pure. However, there are instances where the practitioner is allowed to cut the paper with a pair of scissors. The use of scissors is seen as symbolic of using weapons such as swords, knives, and daggers against one's enemies. Some situations in which you would cut your petition paper with scissors can include when driving two people apart, or working enemy tricks.

In my personal practices, I prefer the paper to form a perfect square. However, I've never seen any reference where this was a traditional rule sacred to the practice of Hoodoo. Ideally I like to use brown paper bags and lead pencils or regular ink pens whose colors match my goal (red for love, green for money, etc…) and usually paired with black for contrast. For example, a prosperity petition would have my name nine times in black ink and crossed nine time with 'prosperity' in green ink. I usually incorporate symbols such as dollar signs, hearts, and astrological symbols into the petition.

If I am writing a petition that will have an effect on two people, such as bringing them together or driving them apart; I will cross one name with the other and write what I want to happen in a circle around the names. For example, in the photo above you can see an example of a petition I wrote when I wanted a local car dealer to finance me when I went to buy a new car. I wrote his name in red, so that he would be filled with positive thoughts of me so he would be inclined to finance me; my own name was written in black to surround me with an aura of prosperity and show me as someone who will make my payments on time. The paper itself was torn from a sack of sugar.

If I am writing a petition that is meant to command or compel another person, I will write their name in all lower case letters and cross and cover their name with my command in all caps (usually with a sharpie). Again, my specific command will be written around the names in a circle.

In addition, I have also used different types of papers for different situations.


I keep all my papers in separate ziplock bags labeled by type of use. The papers associated with specific people are placed in smaller ziplock bags along with any other personal concerns I have belonging to said person.

Crossing and Covering is one popular method by which root workers write their petitions. Depending on how you are doing the work, a name (usually the person the petition is to affect) is written down 9 times. The paper is then turned 90 degrees and your wish or your name is written over the other name an equal number of times, thus crossing and covering it as you go. Petitions are placed under overturned saucers, on top of which candles are burned, placed in mojo bags, etched on the reverse of talismans, etc… 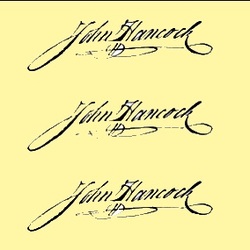 The simplest petition of all consist of writing the person's name on a square of paper an odd number of times, usually 3, 7, 9, or 13. The most common seem to be 3, 7, and 9; however I am uncertain as to why 5 is rarely if ever used since it is associated with the "five-spot" of deploying ritual remains.  I believe that odd numbers are used, in lieu of even ones,  because odd numbers are thought to be both active and dynamic.


There are many factors that go into deciding how many times a name should be written down when formulating your petitions. Some folks simply have personal preferences and will always write the name a certain number of times. Its just their way.

In my personal practices,  the number of times you write a name on a petition should be based on your intent and those numbers that are in harmony with your intent.

For example, three is the number of manifestation but it is also associated with the Holy Trinity. Three is considered an all-purpose number of times to write a name. If you wish to manifest something, heal dis-ease, confer protection, of affect yourself or another in any way---- then write the name three times.

Seven is a very fortunate number that is associated with luck and attraction. It is also associated with the seven days of the week and the seven classical planets that rule over every human endeavor / goal.  If you are trying to bring about any kind of lasting change, write the name 7 times. That seven is associated with attraction is not to say that it isn't used to move something away from you as well. For instance, a name can be written on a piece of paper backwards to send that person away.


Nine is a very powerful number used to impose your will on others, to cross them, and control them. And finally, 13 is a number steeped in superstition. Often considered an 'unlucky' number it is used when you wish cross or uncross yourself, another person, or to reverse enemy work.

Again, these are not hard and fast rules. What is important, I believe, is that you find a system or thought process that works for you and to be consistent in your adherence to that system. 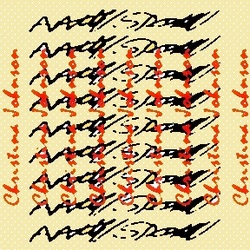 A good rule of thumb to consider when writing your petitions is that the dominate factor always covers the wish. For example, Christina Johnson's boss,  Anthony Spaulding,  is giving her a difficult time at work. Christina wants her boss to back off and start treating her better.

Therefore, Christina has written her name over Anthony's and thus her will is symbolically dominating his. Such a petition may be dressed by putting a drop of Boss Fix type oil in the four corner and center of the paper. The paper can then be deployed in several ways such as placing it under a dressed candle, in a doll baby, or a mojo bag. 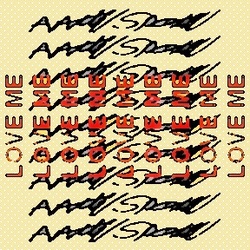 Therefore his wish crosses and covers Anthony's name so that the idea that Anthony should love Derek dominates Anthony's thoughts. Again, such a petition would be anointed with a condition oil such as Lavender Love and deployed in any number of ways (see below). 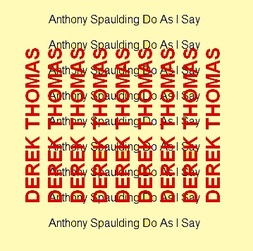 Finally, another option is to write the person's name followed by your wish and then cross and cover this with your own name all written the same number of times.

In this example, Derek Thomas is having trouble with his employee, Anthony. Anthony is undermining Derek's authority and not following his instructions.

Alternatly, Derek could cross and cover Anthony's name with his own (both 9 times) and write his command in a circle around both names. (See example at the top of this page). 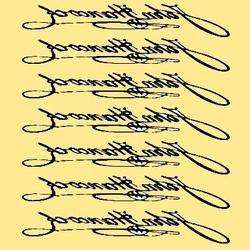 In the Hoodoo Tradition, names are often written backwards, sometimes called mirror-writing, on petitions or candles to represent a reversal, backing off or moving away from you.

We all know what prayer is and have our own definition of prayer. I personally like to think of prayer as a conversation with God. For general purposes however, when most people think of prayer they think of asking God to provide them with something such as guidance, money, healing, protection, or love, etc… secondly they may think of prayers of gratitude such as before a meal.

Prayer Papers are another form of petition that is used to represent one's wish or goal and, like the name implies, usually takes the form of a prayer written on a piece of paper.  Let us consider a simple prayer for prosperity.

"Lord, may my fortune increase so that all my needs are met and more. Amen."

Affirmative Prayer (AP) is a another type of prayer popular among Hoodoo Practitioners that differs from simply asking God for something in that it teaches one to connect with that part of God inside yourself to manifest that which you desire by expressing a positive belief or intention about the outcome. This type of prayer asserts the spiritual truth that, despite our present temporary circumstances, we are always being led to our own highest good.

There are five steps to writing an affirmative prayer. They are:


With these five steps in mind, let us write a an Affirmative Prayer for prosperity.

“All the power that ever was; all the power that ever will be, is here right now and God is that power. I am in the Spirit of God and the Spirit of God is in me. Prosperity flows to me now in a never ending stream of abundance from known and unknown sources so that I now live in a perpetual state of infinite plenty where all my needs are met and more. For this I am truly grateful and release these words to the Supreme Power that provides all good things and it is so. Amen.”

"God has always been and always will be my source and supply of all good things, including good health and well being The power of God-in-Me now flows through my body cleansing, purifying, and healing me in mind, body, and spirit so that I am whole. Every aspect of my life supports my healing and recovery. I know with all my heart and all my mind that this is true and I am grateful that it is so. Amen"

I am in the spirit of God and the spirit of God is in me. Therefore everything that is true of God is true of me. My mind, body, and spirit are in complete harmony with the dance of the universe. There is no eventuality for which I am not prepared to experience in a positive and healthy manner and from which I may learn and grow. I will meet the challenges before me with patience and the understanding that everything is temporary. Thank you God-in-Me for peace and harmony. And so it is.

Once you have written your petition and are satisfied with the results, it can then be dressed by placing one drop of an oil (whose purpose matches your goal) in the four corners and center of the petition.