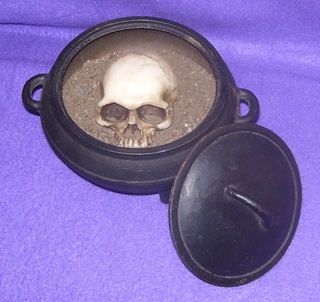 A Spirit Pot
A spirit house serves as a dwelling place for a disembodied entities and a means through which the magician can communicate with them.  They may take the form of a pot, a wooden-box, a jar, or even a doll.

Spirit Houses are not entirely unique among magical practitioners in that they are found in many magickal traditions where humans have contact with non-physical beings. Examples of spirit houses include the European Spirit-Box; the Govi of Vodoun; the Prenda/Nganga of Palo; the Geni Lamp in Arabic tales; the Brass-Vessel associated with Solominc rites; a mojo bag; or even a spirit-doll. It would be difficult to compare and contrast each of these types of spirit-vessels, therefore I will focus on those things which they have in common.

Each object consist of some type of receptacle inside which an additional object, or objects, are contained. In some instances a few of these contained objects are not only traditional but also required.  For example, a properly prepared and consecrated Nganga will should always contain 21 sticks from various trees, among other things.

In other cases, that which goes inside a spirit-house will depend on the purpose that it is to accomplish. For example, a Europeon Spirit-Box calls for quartz crystal and red thread in addition to anything associated with one's ancestors such as their belongings, grave-dirt, cremation ashes, photos, etc..... On the other hand a Solomonic brass-vessel will often require the sigil of the spirit and a drawing of the spirit,  as well as herbs and offerings associated with the spirit. Mojo bags, doll-babies, and spirit-bottles fall into this category as well.

The manners of operation for each of these types of spirit vessels varies from tradition to tradition. However, they each follow a basic order.


The process of creating a spirit-house and obtaining a working spirit is arduous and can take a very long time to successfully accomplish. There are dangers present in the process such as incurring a spirit's wrath by making the incorrect offerings, unreasonable demands, or simply disrespecting the spirit. In addition, one must be careful to avoid dealing with trickster-spirits who are not interested in assisting you in your magical work.

Again, offerings will vary from tradition to tradition and from spirit to spirit. Ancestors are often given a portion of the family's meal, while other spirits require only a simple candle be burned nearby its vessel. Mojo bags, and doll-babies, are often offered a few drops of condition oil or whiskey.

How to Construct An Ancestor Pot

The Ancestor-Pot is a sacred tool that allows you to make a physical connection with your ancestors on a deeply personal level. It consists of a pot into which a portion of dirt from the grave of one's ancestors has been gathered. In the modern era, when people die they are often buried in steel vaults, if they are not cremated.  Before this time, they may have been buried in pine boxes or simply a winding sheet. Over time, their bodies decomposed and returned to the earth. Therefore when dirt was taken from a grave, it was believed that one wasn't simply taking dirt but rather the essence of that person's body that had become a part of, and not apart from, the soil.

In another time, an individual's ancestor pot may well have included the bones of of their ancestor, however, many modern practitioners have taken to including a ceramic or crystal skull in their Ancestor Pot as a substitute for their ancestor's bones. Small libations of water or whiskey may be poured over the skull to "feed" the ancestor or it may be anointed from time to time with oil. In addition, some folks even include dirt from an unused portion of the cemetery to represent the "unknown" ancestors as well as samples of dirt from various places such as banks, post offices, jails, hospitals, crossroads, etc.... to empower the dirt with the force of energy of that place.

My Ancestor-Pot is the focal point of my Ancestor-Altar. Being the dwelling place of the ancestors in the physical plane, it is the place where I focus my eyes and direct my words when I am conversing with them. In fact, I often get ideas, inspiration, and direction from them.

For example, at one point I had a money mojo that was working very well for me. Things were going so great I didn’t think I needed to carry that mojo around anymore so I put it away in a little box where it was promptly forgotten. When my money luck soured I pulled the little mojo back out, tried to feed it and get it working for me again to no avail. Finally, I was having a conversation with my Ancestors who instructed me to place the mojo inside my Ancestor Pot for three days. After three days I removed the money-drawing mojo-bag from the pot and it worked stronger than ever! In fact, the same day I received a substantial windfall.

Sometimes when a spell is finished and I think it needs a little more oomph, I will take the petition that I created for the spell and place it in the Ancestor-Pot, rather than disposing of it.  The same can be done with talismans, jewelry, and other objects as well. In other instances, if I feel that someone or something is interfering with my working, or it needs more power I will remove a candle from the altar where it is burning and place it directly on the Ancestor-Altar. If I have an enemy working against me, or someone is bothering me I will take their photograph or name paper and place it directly under the pot face down and ask the Ancestors to keep them down.

Your ancestors are those spirits connected to you by blood and are your most powerful allies in the spirit world. Working with the Ancestors begins with the construction of an ancestral altar which consists of white candles, flowers, a glass of water, and mementos of deceased relatives. This altar is where you make periodic offerings to the Ancestors, as well as communicate with them on a daily basis explaining what is going on in your life, your needs, and your desires. If you choose, an Ancestor-Pot can become the focal point of your altar where you direct your attention and interest when communicating with them. By placing items in or around the pot you can directly incorporate the energies of the Ancestors into your workings.