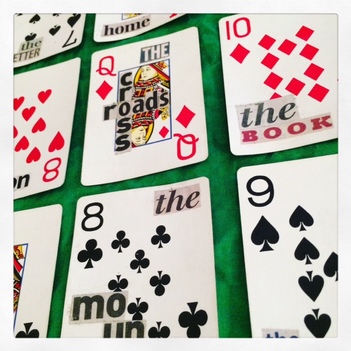 The Lenormand Cards, so named after the famous French fortune-teller Marie Ann Lenormand, come in two forms; the Petite Lenormand consisting of 36 cards and the Grand Jeu a larger deck which has a total of 54 cards.

Marie Lenormand is considered one of the greatest and most influential  cartomancers (card readers) of all time. She is said to have read for people the likes of Empress Josephine, Robespierre, and Tsar Alexander I.  However, she did not conceive of this oracle deck; nor is there any evidence that she used any such deck herself. In fact, what we know today as the Lenormand Oracle Cards were originally conceived as a parlour game by a German businessman named Johann Kaspar Hechtel who originally called them Das Spiel der Hoffnung or the Game of Hope. His deck consisted of a Southern German Playing Card Deck (1) with pictures and titles such as Man, Woman, Clover, Ship, etc...  For this reason, many Lenormand decks will still retain imagery that links them to the individual playing cards (2)

After Lenormand's death in 1843, the Game of Hope was renamed the Lenormand Cards in a campaign to associate the cards with the legendary Marie Lenormand in an effort to market and sell them. The Lenormand Cards have been highly popular in European Countries for decades, however, more recently they have become quite popular among tarot and other diviners in the United States.

The Cards & Their Meanings
​ 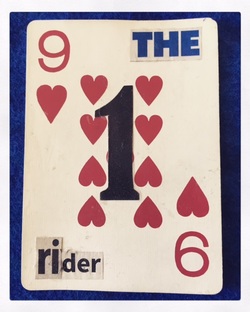 A Word About Interpretation
​

Since their inception many traditions and beliefs have been developed around the interpretation and use of the Lenormand Cards  (i.e. The French Tradition, the German Tradition, the Russian Tradition, etc...) For more information about the various traditions, you will have to do your own research.

In my experience, it is best to decide upon a few meanings for each card and stick with those in the beginning. If, however, an assigned meaning is not in harmony with your ideas regarding that card or symbol you can certainly change that meaning to suit your understanding of the card meaning. Additionally, unlike Tarot, in which many readers assign an altered meaning to reversed cards; reversed cards in Lenormand generally do not change the meaning of the card; that is, whether a card falls upright or reversed---the meaning remains the same. In the place of reversals, however, the meaning of a card can shift slightly due to the card or cards which fall nearby in a reading. For example, Snake + Woman would indicate a deceitful woman; while Heart + Woman speaks to a loving and kind woman.

You will find that it will be extremely helpful for you to keep a journal in which you record your Lenormand readings for yourself and others. In this way, you can go back and examine your interpretations with a clearer understanding of anything which transpired after the fact.

On the Use of Signifiers
​

An Overview of Reading the Lenormand Oracle
​

Reading Lenormand Cards is akin to writing a sentence in which each card represents a word, idea, or action. When the cards are spread out before you, they are read in such a way that they form an intelligible sentence which relates to the theme of the reading in question.

​It is best to start with small spreads utilizing two or three cards. For example. A woman comes to you asking about the state of her marriage. The cards are shuffled and laid out in a straight line thus:
​ 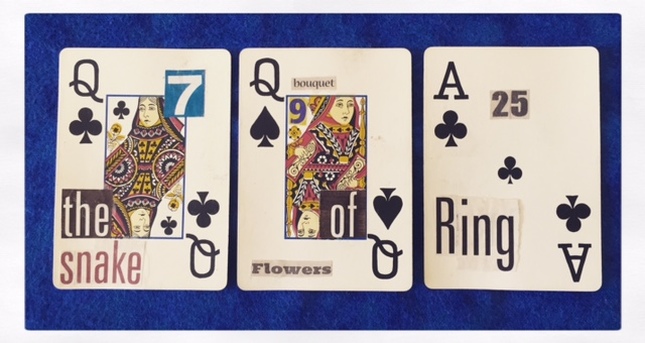 In this spread, my attention and interests are pulled towards the Ring, it is the subject of the reading. The Ring represents marriage, agreements and contracts and fits the seeker's query. The Bouquet represents the seeker a married woman who is graceful and refined. Finally, the Snake represents her husband's female lover...a woman unknown to her.

In addition, if we look at the cards themselves. The Queen of Spades (Bouquet) is looking at the Ring, she is concerned about her marriage. Behind her is the Queen of Clubs (snake) signifying that she was unaware of her husband's infidelity.  The Queen of Clubs has her back to the Queen of Spades, meaning she considers this woman her enemy. We also know that the Snake often represents a woman trained in magic and other occult arts and sciences, so it could also be very well be that the Snake is working magic to break up this marriage so that she can have the man all to herself.

Once you become accustomed to smaller spreads, then you can graduate to larger ones.  In our next example, a man comes to you for a simple reading but does not pose a question. His cards fall as follows:

Here the subject of our reading is the Man, next to the Bear he is a man of means. The Ship indicates that he will soon go on a trip where he will propose (the Ring) marriage to his romantic partner (Heart).  The Heart, representing happiness, affection, and joy is an indication that his partner will accept his proposal.

​With practice you will be able to make better sense of the message of the Lenormand cards and form your own approach to their reading and interpretation.
Notes