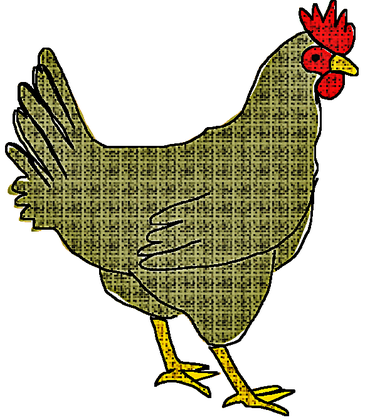 So you want to be Bone Reader? Perhaps you have read my other page on Bone Reading detailing my system of reading 13 chicken bones which have been painted in various colors to denote their meaning and you would like to take a more traditional approach to reading the bones.
​
However, before I go any further I would like to address a few misconceptions about reading the bones. They are:

Real Bone Readers Didn't / Don't Read Chicken Bones- There are those who say that real (i.e. authentic) readers never used chicken bones for divination but rather possum bones were used instead. The reasoning for this seems to be due to the fact that possums are nocturnal creatures who are often spotted in graveyards and so they are more connected to spirits and the ancestors.  This may also be due to the fact that in certain families or regions folks have an affinity, or connection, to possum and so they use their bones for divination. Naturally these beliefs get passed down through the generations, not only through the people who read the bones for also to the people whom they read for and as such information becomes more and more scarce the result is a belief that only possum bones were used to the exclusion of all other types of bones.

In today's culture, for whatever reason, the chicken is associated with cowardice and being afraid. But you shouldn't be afraid to read the chicken bones. I would argue that the chicken has just as much connection to spirits and the ancestors, if not more, than that of the possum. It is no secret that in the religion of Voodoo, chickens were often used as part of a ritual sacrifice to appease the spirits and petition their favor. In the practice of Hoodoo, however, there are many roots (spells) that call for the use of chicken parts. For example:


The chicken was a very valuable commodity to our ancestors. A lot of time, energy, and resources went into their care and feeding so every part of the chicken was used in some way, nothing went to waste which accounts for dishes such as neck-bone stew and fried gizzards....as well as throwing the chicken bones to foretell the future.

You Can't Learn To Read Bones from a Book, Website, Class etc... This is both true and false and I am not saying that because I have a few pages dedicated to the subject on my website. I say that this is both true and false because you actually can learn about bone reading from a book, class, or website but you can only truly learn bone reading by putting what you what you learn into practice. Like other forms of divination, however, such as the tarot, playing cards, astrology, etc... you have to have a certain amount of talent for reading the bones. Another aspect to bone reading includes a strong relationship with one's ancestors as it is believed that it is the ancestors who are speaking to you through the bones. 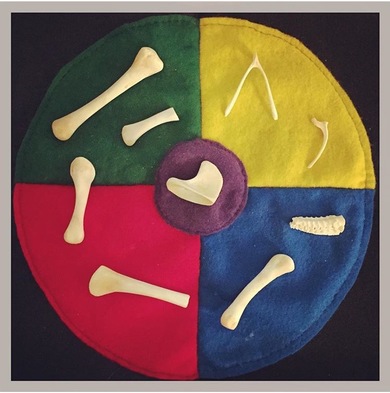 One benefit of reading chicken bones is that they are easily obtainable. At right, you'll see a photo of my own set of chicken bones. These were taken from the remains of a cooked hen purchased at my local grocery store.

Before I explain the bones and their individual meanings, I would like to describe the process I used for preparing them.

1) First, the hen was fully cooked and all meat which could be consumed had been eaten the remaining carcass and bones were boiled in a large pot of salted water for approximately two hours and then allowed to cool.

2) The bones which I intended to use were gently removed and washed in tepid water with a stiff brush to remove any remaining meat or cartilage which was honestly very little after the process of boiling.

3) I then placed the bones in a large mason jar of water along with some dish soap. The bones remained in the jar for a week and I would shake the jar once every morning and again at night. This is done to extract any remaining grease / oil from the bones.

4) Then the bones were placed in a bowl of peroxide for 24 - 48 hours to bleach and whiten them. It should be noted that you should never actually use bleach to whiten your bones because it will cause the bones to break down over time.

5) Next, the bones taken out of the peroxide and rinsed in cool water. Then they were laid on a dry cloth and spritzed with Florida Water before being laid out in the sun to dry.

The Bones & their Meanings

As you can see from the photo above, I use 9 bones. It should be noted at the outset that there are two leg bones as well as two wing bones used here. However, one of each type of bone has been broken and has a different meaning that those of the whole, intact bones.

The bones and the corresponding meanings are as follows:
​
In some instances, with a little imagination,  the bones may suggest specific symbols such as a desk, car, or tree. In these instances such symbols are read in accordance with your own understanding of them. For example a car may suggest movement; or a tree may represent slow growth, strength, health, etc…In other cases the bones may form a letter or number that, when brought to the attention of the seeker, may hold some specific meaning of consequence.

Adding to Your Bone Set 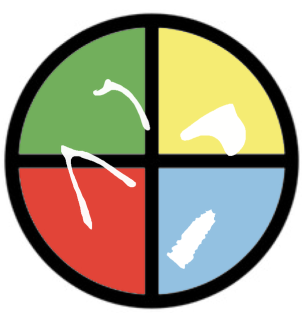 Traditionally, the bones are tossed inside a circle drawn in the dirt. This circle is often divided into four equal quadrants called the Crossroads. When reading the bones the four areas may be designed for various aspects of life such as love, money, health, and the unknown.

Alternately the bones may be tossed onto a specially marked cloth on which the Crossroads have been embroidered. Some folks even toss the bones of a plain white or red-cloth and either read the bones intuitively, being led by spirit, or by imagining the crossroads in their mind.

Bone Scrying is an aspect of bone-reading that not all bone readers practice. It involves the interpretation of the patterns in which the bones fall despite the individual meaning of the bone itself. In those instances that a bone reader observes such patterns, it is one of the first things the reader will look at before interpreting the individual bones and their relationships to one another. Bone Scrying is highly intuitive and one is said to be led in this by the spirit of the bones themselves. Some common patterns are as follows:

When thrown, the bones are not only read in relation to where they fall within the circle and by the patterns they create when they fall, but also in relation to one another. In this way, the meaning of a bone in a reading may expand, diminish, or other wise be altered according to its relationship to other bones.


These are just a few example of how the bones can be read together to bring an added dimension to your bone readings.