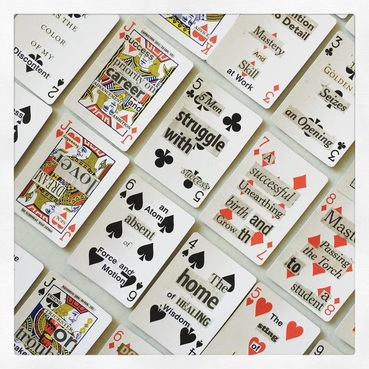 Playing Card Deck with Meanings
I first became interested in reading cards at a very young age. I have vivid memories of Candice Bergen reading the cards as Morgan Le Fay in the 1985 movie Arthur the King. However, I think my biggest inspiration for wanting to learn to read the Tarot was Jane Seymour's portrayal of Solitaire in the 1973 film Live and Let Die. Within the movie, Seymour plays a tarot reader in the employ of a gangster who retains her prophetic powers so long as she remains a virgin.

Unfortunately, at that time I was long on virginity and short on Tarot Cards,  so I first learned to divine by use of playing cards. In fact, my first divination deck was probably an old deck used by my grandfather and his friends to play penny poker, which was a regular Wednesday night tradition in our household as that was the night my grandmother went to Church.

I found it somewhat of a hindrance that there were no pictures on the cards to act as a springboard for my own intuition / psychic faculties and I had a hard time recalling what each card was supposed to mean. For this reason I actually wrote a few key words on each of my playing cards to help me recall their meaning. However, I didn't like the overall look and feel of the deck afterwards and felt that by writing the meaning on the card it detracted from its mystique. Therefore I had to develop another method for reading the playing cards that spoke to both their nature and their structure.  Following you will find the method by which I read playing cards today, and which I have found to produce accurate results.

Meaning in the Cards 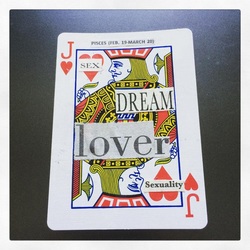 The Jack of Hearts
To begin, the cards are divided into three groups they are: 1) The Four Areas of Life 2) The States of Being and 3) The Players in the Game of Life.

The Four Areas of Life

The four suits in a deck of Playing Cards represent four areas into which life can be divided. These four areas cover the totality of human experience. They are:


The four suits have other association as well such as the four seasons, the four elements, etc...It is also interesting to note that the four suits also correspond to four classes in society during the time in which playing cards came about. That is, Hearts relate to the clergy; Diamonds to merchants and bankers; Clubs to Royalty; and Spades to military personnel.

Such associations help to flesh out your readings and bring an added depth to your divinations. For example, when the Queen of Diamonds appears in a reading, it may indicate a woman of business.

The States of Being

The ten numbered, or Pip, cards represent various states of being or dimensions of human existence. Each card is associated astrologically with the planets in our solar system which, in turn,  also carry their own associations.  For this reason, playing cards lend themselves well to any astrologically based card spreads such as the Clock of Horoscope.


Players in the Game of Life

The Court, or Trump, Cards represent twelve archetype into which human beings can be divided. These archetypes are based on the twelve signs of the zodiac, and again, they carry their own associations.

Jacks represent a person of either gender, whose connection to the seeker is indicated by the suit. Jacks are read as potential, influences not yet fully formed. Hence the Jack of Hearts may represent a potential lover. 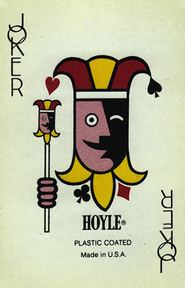 The Joker is something of an enigma among card-readers and carries his own mystique. He is not associated with any suit and, therefore, stands alone and apart from the royal court.

The Joker, is thought to have derived its name from Jucker which is the German word for Euchre. Originally it was called The Best Bower and later it was known as the Little Joker or the Jolly Joker. Suffice it to say that the Joker is akin to The Fool in the tarot deck, and they have several similarities which is as it should be.

The Fool tarot card precedes the Joker by several hundred years (the Joker being introduced around 1860 by Euchre players who had modified the rules of the game) and The Fool is theorized to be the inspiration behind the Joker being depicted as a court jester as tarot decks at that time often depicted The Fool as a harlequin or a buffoon.  In the modern era, the Joker (along with the Ace of Spades) is specially designed as part of the manufacturer's brand (see image at right).

Putting it All Together

With a clear understanding of these three groups, you can combine each individual element to determine the divinatory meaning of each card. For example, the three of hearts means “communication about love or friendship”, which could be interpreted as a love letter, an email, or a secret meeting between lovers.

Conducting a Reading with Playing Cards

Many readers have a ritual that they perform prior to giving a card-reading. It may be something as simple as lighting a candle and incense followed by a sincere prayer for not only the ability to know but also to understand. Then again, other folks simply take out their cards and start the reading. The choice, again, is up to you to decide what works best for you.

The reading begins with choosing a calling-card to represent the querent. There are many different methods which have been used to determine a person's signifier, or calling card. As I have previously described above the 12 signs of the Zodiac are associated with the 12 Royal Court Cards. A person's calling-card may be chosen by their sun-sign. For example, a Virgo may be represented by the Queen of Diamonds. However, this method is not always satisfactory as an adult male may be uncomfortable, or even offended, by being represented by a female card.

An alternative method concerns itself with matching the individual's age to the court cards in the deck. For example, adult males are Kings, adult females are Queens, whereas young adults and teenagers are Jacks. The suit chosen to represent the querent is selected by a few varying methods. They are:


In other instances, you may wish to take a more literal approach and use the 4 of Hearts for an artist, or the Jack of Spades for a solider. In my personal practices, I have been know to have the querent simply cut the cards and place them back together. I think remove the topmost card from the deck and use this as the querent's calling-card. This card often gives me an insight into the individual's personality, mental state, or outlook on life at the moment.

Once the calling-card has been determined, the querent is given the cards to shuffle while thinking of their question or issue. The cards are returned to the reader who then lays them out in a pre-determined pattern and their meanings divined.

The simplest reading of all consist of fanning out the cards and running your hands over them while thinking of your question. Turn over the card that calls to you and base your answer on the meaning of the card. Pull other cards for clarification.

Another simple reading consist of shuffling the cards while thinking of your question, then cutting them into four stacks before you. The top card of each stack is drawn and read as:


In addition, card-spreads used for reading the Tarot can also be used to read the Playing Cards.

Cartomancers have developed several methods to determine if and when an event is likely to happen. One reader I know times events by formulating the question such as How many (days, weeks, months, etc..) before (fill in the blank) will occur? He then has the individual shuffle and cut the cards as usual and lays down the cards in a straight line until a card appears which represents the desired outcome. He counts the number of cards on the table telling him how many (days, weeks, or months) it will take for the desired outcome to occur. For example, the questioner asks: How many weeks will it take before I find a new job? The cards are shuffled and cut and finally laid in the following order 8 of Spades * 10 of Clubs * 3 of Hearts * Ace of Diamonds

The reader stops at the Ace of Diamonds which he interprets as the beginning of a new business venture which promises to be prosperous and successful. The Ace of Diamonds was the fourth card laid down and therefore he predicts that the client will find a new job within four weeks. In addition, the three cards which precede the Ace can predict what the client may feel or experience before he finds the new job such as stagnation (8 of Spades), a sense of being overwhelmed (10 of Clubs), and renewed hope (Three of Hearts). Since the reader has already predicted that the client will get a new job in four weeks, the three of hearts may portend that s/he gets called in for an interview since the number three is linked to the planet Mercury and therefore communication.

People who read Playing Cards have often observed that there is a similarity between how a standard deck of playing cards are structured and the modern calender. They are: