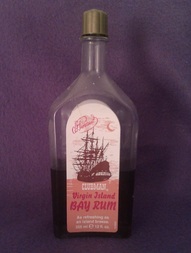 Bay Rum
Water--itself vital to human life--has always played an important role in religious and magickal rituals. Water is commonly used in religious rites to cleanse people, places, or things. In the Baptist Church in which I grew up, people were ritually immersed in a natural body of water by the preacher to symbolize their “rebirth in Christ”--an outward sign of their inward spiritual transformation.

In the Catholic Church, holy-water (water blessed by a Priest) is often sprinkled on people, objects, or in dwellings such as houses to bless and cleanse them of any negative energy.

In the Hoodoo Tradition, many different baths are often prescribed for various conditions. These baths often contain an herb(s), mineral, or chemical in addition to the water depending on the need of the individual.

Many spiritual-waters began as herbal perfumes or colognes and thus often have an alcohol base despite being identified as water. Over time spiritual practitioners began using these perfumes or colognes in accordance with the magickal correspondences associated with the herbs they contained. For this reason, spiritual waters are often added to baths, floor-washes, or rubbed onto the body.  Some may be used to feed mojo bags, wash talismans, roots, or clean candles before their use in spells. Finally, some spiritual waters may be used as offerings to spirits or the ancestors in some cases.