DIVINATION BY THE BIBLE 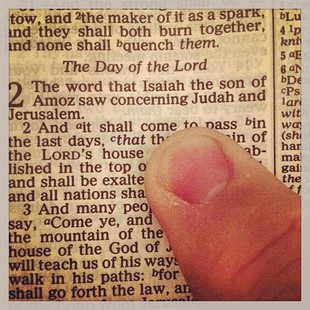 The Holy Bible has long been used in the practice of magic and to tell the future. Of all the books which make up the Bible, the Psalms are arguably among the most popular verses used in the practice of magic. These verses are often uttered in faith during the course of casting a spell. Typically, verses are often chosen according to tradition or for a personal interpretation of a certain Psalm (see links below).

The bible is also a popular medium used in the practice of Stichomancy, or divination by books, although any book can be used in this practice. Practitioners often have their own systems of operation but generally speaking a question is posed while holding the book, it is then opened to a random page with eyes closed and one's finger is also randomly placed onto a page. The passage on which one's finger falls is then read and interpreted.

In the magical tradition of the granny women of the Appalachian mountains if a girl wished to know if her boyfriend loved her she would hang a bible on a string and recite a Ruth 1:16-17 (where you go there shall I follow....) followed by the name of her beloved. It is said that if the bible turns on the string so that the open end would face the girl, then her sweetheart loves her and that they will one day marry. Similar procedures have also been reported for discovering a thief as well as taking off a spell.

Using the Bible to Prescribe Rites

Divination by the Bible is not limited to simply answering questions in a oracular fashion, in fact, you can use random bible passages to prescribe rites for your specific issue or condition. The Bible itself contains several instances where magic is performed and spells are prescribed. In the book of Leviticus 16:21-22 , the High Priest ritually passes the sins of the people of Israel onto the head of goat which is then sent out of the city into the desert where it will presumably die taking the sins of the people with it.

A more complex spell occurs in the book of Numbers 15:12-31 a spell is given for a man who believes that his wife has been unfaithful to him which consist, in part, of the Priest gathering dust from the temple and mixing it with holy water. The Priest makes the woman swear an oath that if she has been unfaithful that the water will enter her and become bitter. It will cause her thigh to rot and her belly to swell. The curse is written down and washed away with the water and the woman is made to drink the water. Thereafter if the woman was unfaithful the curse will unfold as described; however, if she was not then no harm will befall her

The process for divining spells out of the Bible is precisely the same as that of divining answers to one's questions as described at the beginning of this article. The only difference here is that certain key words or phrases found in the text will serve as the inspiration for a spell or ritual. For example, let's say that you are interested in starting a romantic relationship with a certain person. You take out your Bible and ask the question "How can I gain (N's) attention and affection?". You open the Bible at random and blindly put your finger on Genesis 1:27 which states: So God created man in his own image, in the image of God created he him; male and female created he them.

It isn't hard for the reader to draw a parallel between the creation of man by God who gathered dust, formed it into a man and breathed life into him and the process of creating a doll-baby and naming it after the person concerned. Therefore, based on this passage alone you may decide to construct a doll baby of both yourself and the object of your affection and ritually bring them together over a number of days, possibly even seven. The ritual could be accompanied by the burning of red-candles and love-drawing incense.

In another instance, let's say that you have a client who comes to you believing that they have been crossed up. They complain that their luck has turned sour, they can't hold on to any money, and their relationships are no longer satisfying. Once again, you go to your Bible and ask "Has (N) been crossed up and if so, how can he find relief?" and this time your finger lands on Psalm 108: 9 which states: Moab is my washpot; over Edom will I cast out my shoe; over Philistia will I triumph.

The words that stand out to me in this verse include "washpot" and "cast out my shoe", which to me is a sign that perhaps someone had thrown for this person by possibly putting down powders that they had walked through. Therefore I would advise the person to burn their shoes and dispose of the ashes at a crossroads. I would also prescribe a foot-washing if not a series of uncrossing baths. Finally, the words "I will triumph" bodes well for the client being able to overcome the evil that has been directed at them.

Finally, let's suppose that you have a friend that comes to and says she loves her job, she loves what she does but that her co-worker is just overbearing and is harder on her than other co-workers. She wants to know what she can do to have a better working relationship with him. You question your Bible and your finger lands on Psalms 104:34, which says: "My meditation of him shall be sweet, I will be glad in the Lord."

In this example, the Bible is practically screaming honey jar! However, based on the word "meditation" and "be glad", I would also recommend that she refrain from having negative thoughts about her co-worker and his or her behavior. Instead I would recommend that she always greet them with a smile, and to simply expect to have only positive encounters with him.

Of course these examples pre-suppose that you already have a basic understanding of spells, and how to craft them as rarely will a passage simply say something such as "at sunrise light a red candle anointed with Lavender Love Oil and pray Psalm 23 over it nine times...." The best way to get Bible verses for your own work is simply to read your Bible. When you read a verse or passage that speaks to your spirit, inspires a working, or provides a remedy for a current (or even past) situation then write it down.

The Christian Bible is more than a mytho-historical mixture of accounts of God’s relationship with humankind. It contains a plethora of information regarding an array of subjects, which has influenced modern western civilization and world culture. In the practice of conjure, the Holy Bible serves many purposes such as being a tool for divination, a potent talisman, and a source of spells as well as prayers. As the practice of conjure and rootwork continues to fascinate the minds of a new generation of seekers and would-be practitioners we have only begun to penetrate the ancient secret hidden within the Word of God.