Herbs have been a staple in the magickal and healing practices of healers, shamans, and magicians since antiquity. Even today many pharmacological advances have been made from careful study of how they used herbs, including the discovery of aspirin and digitalis. However, many have wondered how the root-workers first learned their knowledge of herbs.

Hoodoo is believed to have originated with Africans who were brought to America as slaves, mainly in the Southeastern states where slavery was legal, and moved West across the nation.  These men, women and children often arrived on American soil with very few personal possessions, if any at all. They did not bring their native herbs with them, and if they did those items were most likely taken away. The slaves found themselves in a place where they were considered the property of abusive slaveholders and they didn’t know anything about the herbs, plants and curios of this strange, new land. African and Native American slaves often found themselves working along side one another and it is believed that through this co-mingling the slaves learned a great deal about the medicinal and magickal uses of the herbs native to America.

One theory suggests that they were taught the use of herbs by certain spirits or deities. Other theorized that herbal correspondences were arrived at via trial and error. Another theory in practice today, the Doctrine of Signatures, states that God marked everything he created with a sign or signature. The doctrine of signatures refers to two individual though related concepts in (Christian) European metaphysics, whose origins lay in the ancient reading of auspices and other omens of the god’s will in antiquity, and which similarly bears upon the meaningfulness of resemblances. The major usage is a doctrine that the Creator had so set his mark upon creation that by careful observation one could find all right doctrine represented and even learned the uses of a plant from some aspect of its form or place of growing.

For the late medieval viewer, the natural world was vibrant with the numinous images of the deity: “as above, so below,” an expression of the relationship between macrocosm and microcosm, the principle is rendered sicut in terra. Michael Foucalt expressed the wider usage of the doctrine of signatures, which rendered allegory more real and more cogent than it appears to a modern eye:

The doctrine of signatures was given renewed thrust in the writings of the Swiss physician Paracelsus von Hohenheim (1493-1541) and continued to be embraced until the 17th century. It held that plants bearing parts that resembled human body parts, animals, or other objects, had useful relevancy to those parts, animals, or objects. It could also refer to the environment or specific sites in which plants grew. Many of the plants that were so regarded today still carry the word root “wort”, an Anglo-Saxon word meaning herb, as part of their modern name.

The radical visionary Jakob Bohme (1575-1624), a master shoemaker of Gorlitz, had a profound mystical vision as a young man, in which he saw the relationship between God and man signed in all things. Inspired, he wrote Signatura Rerum (1621), soon published as the Signature of All Things and the spiritual doctrine was applied even to the medicinal uses that plants forms advertised.

The 17th century botanist and herbalist William Coles (1626-1662), author of The Art of Simpling and Adam in Eden, found that walnuts were good for curing head ailments because ‘they have the perfect signatures for the head,” and as for Hypericum “the little holes whereof the leaves of Saint Johns wort are full, does resemble all the pores of the skin and therefore it is profitable for all hurts and wounds that can happen thereunto.” Nicholas Culpepper’s often reprinted herbal takes the doctrine of signatures as common knowledge and its influence can be detected still in modern herbal lore.

Selected Herbs & their Uses in Hoodoo 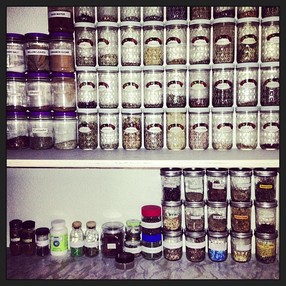 This short list of herbs was chosen for the fact that each and every herb listed is easily found within a grocery store, spice rack or otherwise easily accessible to the average shopper. Once you are comfortable working with these easily accessible herbs, you may want to experiment with other more exotic, hard-to-get herbs----many of which can easily be ordered online these days.

If you are lucky to live in a larger-city there may be a Botanica close enough to you to purchase them straight away and take them home rather than having to wait for them to be delivered to you. Shopping at a Botanica in your own city has the added benefit of supporting your local economy, allows you the opportunity meet and interact with other practitioners, and allows you to actually see the herb(s) in question before taking them home.

However, if you really want to challenge yourself, you will research those herbs that grow naturally in your environment and cultivate/harvest them yourself. For example, in the town in which I live Lavender grows along the side of the roads in late-spring/early summer so I never actually buy Lavender anymore!