Ritual Use of Incense

Incense has many uses in the practice of Hoodoo. They include


Setting the Mood- Similar to how color affect our biology, certain smells also bring up associations in our minds that can have a profound effect on our mood. Our olfactory sense is the closest of our five senses tied to our memories, by using scents tied to pleasant or unpleasant memories we can call up the needed energy for rituals and spells. Imagine doing a love spell and burning incense that reminds you of your first boy/girl friend. Now imagine doing a love spell and burning incense that smells like burning tires. Which spell do you think has the best chance of being successful?

Purification- The burning of incense has long been used by Pagans, as well as other religions to purify people, places, and things. It is believed that the purity of the smoke, it’s pleasant scent, and the ingredients which make it up (usually herbs and oils) drive out negativity and evil.

Release Energy- As I stated above, natural incenses typically contain dried herbs and scented with essential oils that when burned release energy into the universe much like a prepared candle. This energy can be programmed by the specific intent of our rite (spell, chant, meditation, visualization, etc…) Incense manufacturers now make specific incenses designed to bring about specific wishes for love, success, money, health, blessing, etc…

Transmitting Prayers- In ancient times, the sky was believed to be the abode of the gods. Prayers, chants, spells, etc… were performed accompanied by the burning of incense in the belief that as the smoke rises towards the heavens and moved across the higher planes it would carry our wishes to God and spirits that would grant them.

Offering- Incense has long been used in folk magic practices as an offering/sacrifice to deities. This was often done at the behest of a deity (Exodus 30:1) or in an attempt to appease him or her so that s/he will be inclined to favor one's petition.

How to Shape Incense into a Cone for Burning 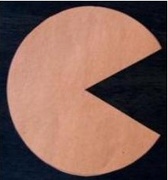 Using your compass, draw a circle on a sheet of paper. For the purpose of this article, I created a circle by tracing a standard coaster on a sheet of orange paper. Cut the circle out of paper and then cut a triangle shape whose apex is the center of the circle. When you are done your piece of paper should resemble Pac-Man.

Point Pac-Man's "mouth" towards you. Bring this "lips" together allowing them to over lap a bit. This will give you a wide cone. To make the cone more narrow tighten the paper until the cone is the size that you desire, then use tape to secure the cone. 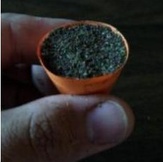 Tightly pack the loose incense into the cone. 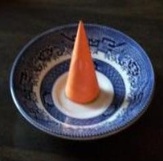 Holding your little cone up so that no incense spills out, place a saucer upside down on top of it and then turn it over. Place your saucer on a flat surface. 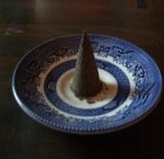 Gently tap the cone and then slowly lift it up revealing your incense cone!

You can now light your incense.