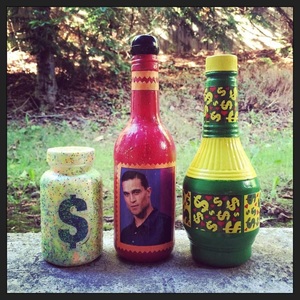 Bottle Spells
This type of magic consists of spells which have been sealed inside bottles or jars. The jars themselves can be plain or they may be decorated with paint, ribbon, cloth, charms, decoupage, or anything of an aesthetic value. From the type of bottle used, its color, the herbs, roots, curios, condition oils,  petitions, etc...that are placed inside of them----everything about bottle spells speaks to the nature of the work being performed. For example, a bottle spell to hotfoot (or drive away) an enemy would traditionally be made from an old used bottle of hot-sauce; whereas a bottle spell for healing may be made from a pill bottle.

Arguably, the most popular form of bottle-spell is the witch-bottle for protection. Witch-Bottles consist of bottles which have been filled with broken pieces of mirror, pins, needles, razors, and other sharp instruments. In some cases, depending on the practitioner, herbs or other curios may be placed inside the jar before it is filled with the individual's urine and sealed. The bottle is then secretly buried on the property of the person who made it (usually near the front door) in the belief that it will attract and destroy any evil that is directed towards them.

What you do with your jar largely depends on the nature of the work. They may be kept on an altar where they are worked at regular intervals, they may be buried on or off your property, they may be thrown into running water, they may be left at a crossroads or some other variation of disposing of your work.

Types of Bottle Spells & How to Use Them

Honey Jars are a type of container-spell which uses sweeteners such as honey, syrup, molasses, etc… in conjunction with the burning of a series of fixed-candles for the purpose of compelling an individual to favor your petition in business, love, or court-cases.

A typical honey jar is created using a small glass container, such as a baby-food jar, that has a metal lid and filling it with honey. Depending on your specific intent as well as what herbs, curios, and/or personal concerns you have available, additional items may or may not be placed inside the honey. At the very least, a written petition should be placed inside the honey. The jar is then sealed and a prepared candle is affixed to the top of the lid.

Sympathetic magic is a concept which states that “invisible bonds connect all things.”  It can be divided into two distinct subcategories. They are:


Correspondences refer to the relationships that can be used for magickal workings. They make use of how things relate to one another. It is helpful to think of correspondences as a list of possible ingredients from which you can make selections. Correspondences are present in the form of the herbs and or curios, if any, that are included in the honey jar as well as the color of the candle chosen and the type of condition oil with which it is anointed.

The term correspondences can also refer one’s choice of time in which to work the spell. Choices include the Moon Phase, Moon’s Sign, Day of the Week, and Hour of the Day. Most honey jars are worked for positive purposes, therefore they will often be begun while the moon is Waxing, or growing in size. The reasoning for burning the candle on Mondays, Wednesdays, and Fridays has to do with the planetary correspondences attributed to those days of the week as well as their associations.


As most honey jars are worked for love and friendship, the burning of the candles on Mondays, Wednesdays, and Fridays is to communicate the emotion of love and friendship to the individual and have those feelings returned in the form of having one’s petition granted.

In the first instance, the petition was written on a two-dollar bill which was wrapped around a lodestone fed with magnetic-sand. The jar included herbs for money drawing and increase such as cinnamon, chamomile, thyme, and basil to name a few. Finally, green candles anointed with Money-Drawing Oil were burned on top of the jar three times per week.

As you can see, honey-jars are a powerful tool to sway others to your cause and win favors in business, love, or even court cases.

Vinegar Jars are a harmful type of bottle spell used to sour a person's life. They are usually created by placing the individual's personal concerns in a jar along with your specific herbs, curios, petitions, etc... and then filling the bottle about 3/4 of the way with vinegar. Similar to doll-baby, you ritually call that person's spirit into the bottle and then shake it everyday or on certain days, moon-phases, etc..calling their name and affirming that their life will become "as sour as this vinegar".

It is important that you safely store your vinegar jar when not in use as the gases in the vinegar have been known to build up causing the bottles to explode. I usually place mine in a minimum of three ziplock bags and store them in the storage shed off my patio.

Hot-Foot Jars are used to drive away enemies and other troublesome individuals. They are typically made from bottles of hot-sauce. In fact, one Rootworker taught me the following hot-foot spell to drive off an enemy. Purchase a bottle of Texas-Pete hot sauce. When the moon is full, write your enemy's name 13 times backwards on a piece of paper, roll it up away from you and insert it in the bottle. As the sun goes down, take the bottle and shake it several times calling the person by name saying "John Brown, as another day is gone and can never return may you leave this place and don't come back!" Do this every day for 12 days as the moon wanes and on the 13th day you toss that bottle in running water.

These types of bottles are used to bring about the end of a person's relationship. Although they are commonly used on romantic or married couples, I have known folks to employ these types of spells to break-up friends and even business partners! In addition to the personal concerns belonging to the individuals, break up bottle usually contain an assortment of herbs and curios that are thought to make people argue and fight such as pins, needles, nails, red-pepper, black-pepper, black-cat hair, and black-dog hair. Similar to a  Hot-Foot Jar, you would shake the break-up bottle at regular intervals calling on the two individuals to argue and fight until they separate from one another. 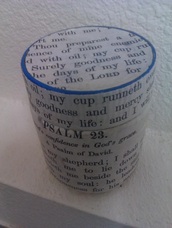 A Peaceful Home Jar
Bottle-spells are a versatile type of magic which can be adapted to virtually any purpose. Everything placed inside the bottle as well as the bottle itself will speak to the nature of the work being done. They may be plain or decorated as in the Peaceful Home Jar (at left) which has been decorated with verses from the Holy Bible.

In addition to the types of bottles and jars listed above, you can find bottle spells for virtually any condition including Love-Me, Boss-Fix, Follow-Me, and Un-Crossing to name just a few.

How you use your jar will depend on the purpose of the jar. They may be kept worked at regular interval, they may be buried, they may be thrown into running water, left at a crossroads, a graveyard, or some other variation of disposing of your work.