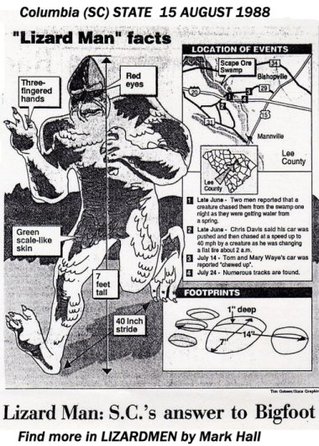 The Lizard Man has been described as a humanoid cryptid which stands on two legs and is over 7 feet tall. He has been said to have green scaly skin, and glowing orange eyes. Eye witness accounts describe him as having three toes on each foot and three fingers on each hand. He is also said to be supernaturally strong.

The first reported sighting of the Lizard man occurred on June 29th, 1988 by Christopher Davis, then a 16 year old young man. Christopher was driving home from work around 2 am and stopped near the Scape Ore Swamp to change a flat tire. As he finished changing the tire, he reported hearing a strange noise behind him and when he turned to investigate, he saw the creature coming towards him in an aggressive manner.

According to Davis’s report, the Lizard Man tried to take hold of his car, jumping on its roof as he fled the area. When he arrived at home, Davis called police who observed that though Davis’ side-view mirror was damaged and there were scratch marks along his vehicle where it is said that the creature ripped the vinyl siding off the car, there was no corroborating physical evidence of Davis’ encounter with the creature.

Within the next few weeks, police received enough credible sighting of the creature to believe that witnesses were not fabricating their stories, although they treated the sighting with a healthy dose of skepticism as well as concern for the citizens well being. The general consensus among law enforcement officials was that the creature was more likely a bear than an actual Lizard Man.

The sightings were enough to attract attention in the national media, which in turn attracted a significant increase in tourism from visitors hoping to see the Lizard Man. One television station offered one-million dollars to anyone who could capture the creature alive. However, as summer moved into fall, sightings began to decline, the last of which occurred in July of the same year.

Early the following month an airman named Kenneth Orr stationed at Shaw Air Force Base filed a police report alleging to have had an encounter with the Lizard Man in which he fired his weapon injuring the creature. Orr offered some scales and blood as proof of his encounter, but recanted his statement two days later when he was charged with unlawfully carrying a pistol and filing a false police reports. Orr citied his reason for fabricating the story was to keep the story of the Lizard Man circulating.

In 2005 an incarnation of the Lizard Man was used in a television commercial to promote the South Carolina Education Lottery.

In July 2005, the Lizard Man "reappeared" in television promotions for the South Carolina Education Lottery. Two months later a woman in Newberry, South Carolina, reported seeing the Lizard man in her yard.

Early last year a couple in Bishopville reported damage to their car and evidence of blood. They also reported the disappearance of their cat, all of which prompted many to believe that the Lizard Man had returned. The blood from the couple’s car was examined by a Veterinary Lab in California who determined that the blood was canine in origin, likely a wolf. Not long after these events the Sheriff discovered the bodies of both a cow and a coyote near the couple’s home.

Since that time, there have be no future sighting, but many believe that he is still out there.